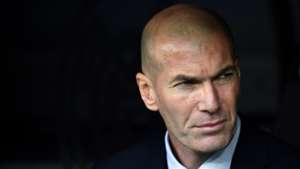 Zinedine Zidane claims to have received no approach from Juventus regarding a return to Turin but can offer no guarantees over his future as manager of Real Madrid.

It has been suggested that the Frenchman is wanted by another of his former clubs back in Italy.

The World Cup winner enjoyed a memorable spell in Serie A with the Bianconeri in his playing days before being added to the pot of 'Galacticos' in Madrid.

Speculation has surfaced regarding a possible retracing of those steps, with Juve said to be mulling over another change in their dugout.

Maurizio Sarri is currently at the helm, but he could be moved on if an opportunity to appoint Zidane opens up.

The current Blancos boss says there is no substance to those reports at present, telling reporters ahead of a meeting with Real Betis on Sunday: "No, no ... no one has contacted me and I don't know anything.

"You know what it's like, people say a lot of things."

While seeking to distance himself from the Juventus links, Zidane admits that he cannot say for sure whether he will still be at Santiago Bernabeu next season.

He added: "It's not like that. Knowing what comes next doesn't exist.

"I feel supported by the club, yes, that's clear. The people that work here, we're all pulling in the same direction. But after all that, I know how this works. I'm coach of Real Madrid today but tomorrow that could change."

Zidane has taken Real back to the top of La Liga, with victory in a Clasico clash with Barcelona last time out returning them to the summit.

The Blancos' efforts in 2019-20 have, however, been hindered by untimely injuries, with Eden Hazard among those currently stuck on the sidelines.

The Belgium international forward has been forced to undergo surgery after fracturing a fibula in February, with it still unclear when the 29-year-old will come back into contention for Madrid.

Zidane said of his stricken star: "I spoke to him after the operation to see how he was, and he's fine.

"He was really annoyed after the injury, but now, as the operation has gone well, his mood is getting better.

"Let's hope he can be back with us soon. I can't say when, it's possible that he'll be back before the end of the season."