Chelsea youngster Lamptey weighing up offers from Lille and Torino 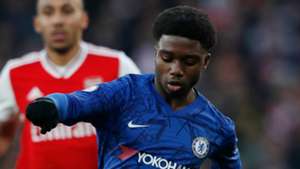 Chelsea youngster Tariq Lamptey has been approached with pre-contract agreements from Lille, Torino and an unnamed Premier League club as he weighs up his future.

The 19-year-old, who has made three appearances for the Blues this season, is out of contract at the end of the season and is free to discuss terms with other clubs as he enters the final months of his deal.

Chelsea are hopeful of keeping the teenager, with talks ongoing regarding fresh terms, though small details have meant no agreement has been reached.

As such, Goal can confirm that a host of other clubs have made their interest known, with Paris Saint-Germain, Wolves and Nice also weighing up whether to make their own offers to the full-back.

Should he remain in west London, Lamptey would face competition for a regular starting berth going forward, with Reece James having impressed since making his Blues debut earlier this season.

James' performances have seen him become one of a number of academy graduates to earn a new deal in recent months alongside Callum Hudson-Odoi, Mason Mount, Ruben Loftus-Cheek and Fikayo Tomori.

Abraham's potential contract is proving difficult to secure, however, with the England international forward wanting wages closer to the ?180,000-a-week deal that Hudson-Odoi is on, though the winger only earns that amount if certain performance-related targets are met.

The January transfer window, meanwhile, is set to close on Friday, with Lampard having been frustrated in his pursuit of new signings so far in 2020.

Chelsea remain outsiders in the race to sign PSG striker Edinson Cavani, with Atletico Madrid still pushing for a deal to sign the Uruguay international.

Outgoings are more likely, with Olivier Giroud having agreed personal terms with Inter while out-of-favour winger Pedro is also facing an exit late in the window.

Roma have shown an interest in the former Barcelona forward, though it is believed he was seen as a second option should the Giallorossi fail to sign Barca youngster Carles Perez.

Perez is due to undergo a medical in Rome on Wednesday, meaning that MLS sides Inter Miami and New York City FC's only competition is set come in the form of Japanese outfit Vissel Kobe.