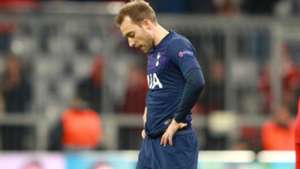 Christian Eriksen showed that he doesn't want to play for Tottenham with his performance against Bayern Munich, according to former Manchester United midfielder Darren Fletcher.

Already-qualified Spurs finished their Champions League group stage with a 3-1 loss to the German champions at Allianz Arena on Wednesday, with the 27-year-old getting his first start since the appointment of Jose Mourinho as manager last month.

The Denmark international, whose contract expires at the end of the season, has been linked with a move away from the club for the past 12 months - with Real Madrid and Manchester United both heavily mentioned as destinations.

Ex-Red Devils star Fletcher, who won a Champions League title and five Premier League championships at Old Trafford, believes Eriksen has already checked out of Tottenham mentally and he has lost his passion for the shirt.

"Christian Eriksen has fallen out of love with the club," Fletcher told BBC Radio 5 Live.

"He obviously doesn't want to be there."

New boss Mourinho, who replaced Mauricio Pochettino on November 20, made it clear to Eriksen that he would be used as a squad player after using him off the bench in his first game in charge against West Ham.

The playmaker has been left as an unused substitute in two of Mourinho's four Premier League games at the club to date.

"My decisions about starting him or not starting, selecting or not selecting, will be based on a perspective of a future," Mourinho said after the 3-2 win against West Ham on November 23.

"I cannot hide that. We have a present and, in football, we have to focus on the present. In this case, the game tomorrow, but it's a club where you have to think about the future."

Tottenham's passage to the round of 16 was already secured prior to Wednesday night's match at the Bundesliga champions but the English side were hoping to avenge a 7-2 loss to the same side earlier in the campaign.

However, Spurs failed to impress early with Kingsley Coman opening the scoring on 14 minutes after Serge Gnabry's pass found him in space in the penalty area.

Ryan Sessegnon did manage to equalise soon after with a vicious drive, vindicating the decision by Mourinho to give the English winger a chance.

But Thomas Muller struck on the stroke of half-time and the match was sealed with Philippe Coutinho's goal mid-way through the second half.