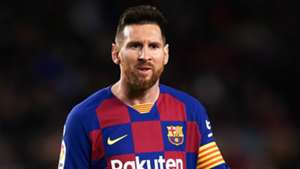 Lionel Messi acknowledges Barcelona are still smarting from the manner of their past two Champions League exits but must "start from scratch" this season.

Barca were eliminated on away goals in April 2018 after squandering a 4-1 aggregate lead over Roma, losing 3-0 in the second leg of their quarter-final tie at the Stadio Olimpico.

Liverpool then overturned a three-goal deficit to the Blaugrana at the semi-final stage last season courtesy of a dramatic 4-0 victory at Anfield, with Messi admitting the pain of those galling eliminations remains strong.

Having emerged top of the pile from a tricky Group F that included Borussia Dortmund, Inter and Slavia Prague this term, Messi is urging them to forget about what happened in the past when the knockout stages commence in February.

"To be honest, it's always there," the six-time Ballon d'Or winner said of the painful Champions League eliminations at an Adidas event on Wednesday.

"But we have to start from scratch. It's a new year, a new competition. Obviously we have to learn from mistakes, but to think of the present and the future.

"We must forget what happened last year and the year before, it would be a mistake to think of that."

The Liga leaders had already qualified ahead of the trip to Italy but they should take heart from victory at the San Siro which is rarely achieved without a stern test.

The visitors took the lead through Carles Perez's close range effort on his Champions League debut.

Romelu Lukaku equalised close to the break but Fati strike four minutes from time consigned Inter to the Europa League.

"I played the give and go with Luis and when I scored the stadium just went silent. I'm super-happy," said Fati, who has represented Spain at under-21 level.

"It's a dream. Everything seems to be going at high speed. I just have to take every opportunity I'm given. But here, you look around and think: 'what have I done'?"