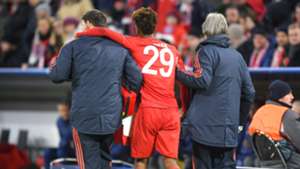 The 23-year-old was substituted mid-way through the first half at Allianz Arena, after opening the scoring for the Bundesliga champions in the 14th minute with a smart finish past Spurs goalkeeper Paulo Gazzaniga.

With no opposition defender in sight, Coman picked up the injury while trying to control the ball and was catapulted into the air before landing awkwardly - with what appeared to be a hyperextension of his left knee.

The France international sought medical treatment on the sideline immediately but was fortunately able to hobble from the pitch with assistance as he was replaced by Thomas Muller.

Coman has had persistent injury issues through his career since joining Bayern from Juve in 2015 - missing 31 games in 2018 because of two separate syndesmotic ligament issues in his ankle.

In 2018, Coman made comments suggesting he would consider retirement if he suffered a serious injury again in his career.

"It was a very difficult year," Coman told TF1. "When I hurt myself, it was the end of the world for me.

"I hope I don't have to relive what I've been through, enough is enough. I will not accept a third operation - it will mean maybe my foot is not made for this level.

"I will then lead another life, an anonymous life."

However, he backtracked shortly after, telling German media that he was trying to explain how another rehabilitation on his ankle would be crushing.

"That was misinterpreted. I meant that I wouldn't feel like having to go to rehabilitation again if I suffered the same injury once again in the same year - meaning in the next few weeks," Coman told Bild.

"I didn't comment on anything further out in the future," Coman told Bild.

The night against Spurs had started so well for Coman, with a pass from Serge Gnabry deflecting through to the left winger in space, and he calmly slotted the ball into the net past the on-rushing opposition goalkeeper.

Tottenham equalised in the 20th minute through Ryan Sessegnon after the ball fortuitously fell to the Englishman in space before he beat Manuel Neuer with a vicious drive.

However, Bayern managed to get their noses in front on the stroke of half-time when Muller poked home in the six-yard box after Alphonso Davies struck a shot off the post.

The German giants had already qualified for the Champions League round-of-16 as top of their group after winning their first five matches in the competition.