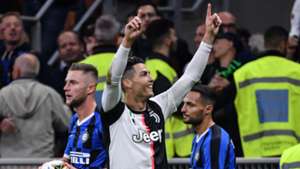 Juve have won each of the last eight Serie A titles, but a 2-2 draw with Sassuolo last weekend allowed Antonio Conte's side to leapfrog them into first place.

Inter's only league defeat this season came against Juventus, and they have dropped just two points from their other 13 games - a startling run of form which even Marotta didn't expect when Conte was brought in this summer.

"It's still only Week 14, so we are well aware that winning the Scudetto from this first season will be difficult," Marotta told reporters.

"Juve have two very strong teams to call on, as they have two players for every role, and I think they'll do it again this season.

"In any case, I will admit that I did not expect such an immediate impact from Antonio Conte on our squad."

After finishing 21 points and three places behind Juve last season, Inter's return to the Scudetto fight has been a welcome surprise for those of a black-and-blue persuasion. Inter last won the title in 2010 under Jose Mourinho, as part of that season's historic treble.

Now, they haven't dropped points in the league since October, though they are likely to need to beat Barcelona next week to secure passage from the group stage of the Champions League.

Currently ahead of Borussia Dortmund on goal difference alone, they need to match the Bundesliga side's result to progress to the knockout round - with Dortmund playing bottom club Slavia Prague.

Before that comes a home fixture with Roma, with the game already overshadowed by Italian newspaper the Corriere dello Sport's labelling of the match as 'Black Friday' due to the contest between Inter's Romelu Lukaku and Roma's Chris Smalling.

Both players have publicly condemned the headline, which came barely a week after all 20 Serie A clubs had released an open letter admitting Italian football's "serious problem" with racism and committing to a "comprehensive and robust anti-racism policy" to combat it.

Both Roma and Inter's rivals AC Milan issued a short-term ban to the Corriere in response to the offending headline.

The newspaper attracted further condemnation for its response, with the following day's headline labelling its treatment by accusers as a "lynching".