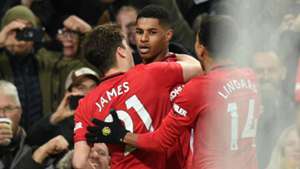 With Manchester City and Manchester United both underperforming, Saturday's derby looks set to be one of the most low-key in years.

Nevertheless, they are clear 3/10 (1.30) favourites with 888Sport to pull off a morale-boosting win over their local rivals.

Sitting 11 points behind their neighbours in sixth place, the Red Devils can be backed at 17/2 (9.50) to ease the pressure by coming out on top in enemy territory.

Just one of the last eight competitive encounters between this pair has resulted in a draw, but you can get odds of 19/4 (5.75) on this one finishing up all square.

Aymeric Laporte, Leroy Sane and Sergio Aguero are all unavailable due to injury, while Oleksandr Zinchenko is unlikely to feature despite returning to training.

While it is difficult to attribute both teams' struggles to any one specific shortcoming, it is fair to say that neither has looked particularly impressive at the back in recent matches.

The Citizens have gone eight games without a clean sheet in all competitions, while Ole Gunnar Solskjaer's men have conceded in each of the last 10 league fixtures.

This should at least make for an entertaining derby encounter, particularly as the hosts have only failed to score once in 22 matches this campaign and their opponents have found the net in all but one of their last 11.

All in all, odds of 4/5 (1.80) offer solid value on both teams getting on target for City's ninth consecutive game, as well as a sixth in a row for United.