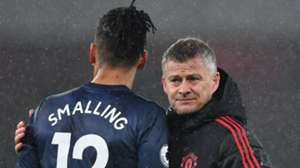 Ole Gunnar Solskjaer says the 'Black Friday' headline from Corriere dello Sport on Thursday is the 'worst front page I've ever seen' after confirming he expects Chris Smalling to return to Manchester United.

Smalling is enjoying a spell of fine form since swapping United for Roma on loan in the summer, helping his side to fifth place in Serie A, level on points with fourth-placed Cagliari, while conceding only two goals more than table-topping Inter.

Former Red Devils striker Romelu Lukaku will come up against his old United team-mate when the Nerazzurri host Smalling's side at San Siro on Friday evening and the pre-match talk largely centred around the pair's reunion.

One such feature was run by Corriere dello Sport with the title 'Black Friday', sparking a backlash among the football community due to the racially insensitive nature of the headline.

And Smalling's old boss was quick to back the centre-half during a pre-Manchester derby press conference, questioning how such an article could be published without realising the damage it would cause.

"First of all, when you see that paper you say 'wow, is that really possible?'" Solskjaer began. "It's the worst front page I've ever seen and we've been in touch with Chris just so he knows we'll back him - and Romelu as well.

"I don't work in your line of business (journalism) but, wow, it's incredible. That has to be stamped out.

"Chris has been fantastic. We know sometimes if you change environment it can go either way but Chris is the type to relish these challenges. He's cultured, he enjoys life down there and it's a new experience for him.

"He's a boy who couldn't be here without being a regular and we're so happy for him because we can see the top player that he is."

Questioned on whether Smalling would return to Old Trafford someday, despite now being 30 years old, Solskjaer replied simply: "Yes."

Manchester City host United at the Etihad on Saturday evening, with the Red Devils keen to build on a 2-1 win over Jose Mourinho's Tottenham in midweek, while Pep Guardiola will be keen to pocket all three points to stay in the title hunt with Liverpool.