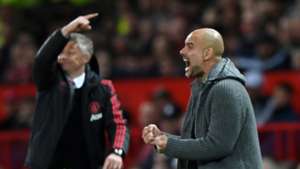 Ole Gunnar Solskjaer has aimed a cheeky dig at Manchester City ahead of derby day at the Etihad Stadium, with the Manchester United boss saying: "At least we play every year now!"

Back in his playing days, the Blues were far from being the force that they are today.

City slipped as far as League One at one stage, with the rivalry between two warring neighbours not as fierce as it is in the present.

Solskjaer has welcomed the opportunity to remind the Blues of that fact, with United looking forward to testing themselves once again in what promises to be a passionate affair.

Asked for his take on the Manchester derby, Solskjaer - who first arrived in England back in 1996 - told reporters: "At least we play every year now!

"It took many years before I played a Manchester derby myself.

"It's changed in a way, Manchester City are a better team now than when I was playing.

"Football has changed quite a lot, you were allowed a few more proper tackles with every little angle, everything being scrutinised now.

"It's more of a technical, tactical game than physical and mental. A derby should be played as a derby, we don't play basketball and we're ready if that happens."

United will make the short trip across Manchester on Saturday buoyed by a 2-1 victory over Tottenham and former manager Jose Mourinho in midweek.

Confidence has returned to the ranks on the back of that outing, with the Red Devils up to sixth in the Premier League table, but Solskjaer is fully aware of how big a challenge City will pose.

He added: "We're going away against arguably the best team in England.

"Difficult game but we need consistency.

"I said it before this is a chance for everyone. There was doom and gloom but it's a chance to turn that doubt into belief and for us, if we can manage to get another performance the confidence, the way we played against Tottenham, if we can do that at the Etihad we can come out of it with a result.

"People say 'why do you not have better results in other games' but the Premier League is hard, no matter who you play, it's margins.

"I think it's a compliment to the league, you've got City, Liverpool, Leicester consistent but the other games are really tight."