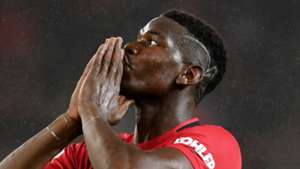 Manchester United are still hoping to have Paul Pogba back before the New Year and are ready to welcome Anthony Martial into the fold for a derby date with Manchester City on Saturday.

One France international remains out of contention for a trip to the Etihad Stadium, with World Cup winner Pogba yet to fully recover from a niggling ankle complaint.

His fellow countryman, Martial, has returned to full fitness, though, and could step back into Ole Gunnar Solskjaer's starting XI after sitting out Wednesday's 2-1 win over Tottenham.

"We hope to have Anthony definitely for part of the game, not sure if he's able to start, Paul won't be, no," Solskjaer told reporters when asked for an update on two key men.

He added on when he expects to have Pogba back: "As soon as possible, he's out on the grass training, I said in 2019 so hopefully before the New Year."

United have struggled for consistency during Pogba's enforced spell on the sidelines, but are looking to take positives from individual performances.

Marcus Rashford is enjoying a rich vein of form, with his personal purple patch seeing him record 12 goals in his last 13 appearances for United and England.

Quizzed on whether the 22-year-old can become a prolific presence, Solskjaer said: "He is doing that at the moment and how he didn't get the goal against Villa is beyond me.

"He's consistently now scoring 10 in the last 11 or whatever, but it's not like four in one and two or three without, it's not just in spurts, but he's consistently getting chances and into better positions, and on Wednesday night he was unbelievable and we hope to see that again."

Rashford bagged a brace to help the Red Devils past Tottenham and Jose Mourinho.

His efforts have helped to lift the mood again at Old Trafford heading towards derby day, with Solskjaer admitting that his side feel buoyant ahead of one of their most testing games of the season.

He said: "Confidence is a strange thing in football, you can get performances and results like Wednesday night and it boosts it so much and I know our boys will be up for it.

"Yesterday [Thursday] was a recovery day, they were tired, today's another preparation day, still haven't had that session. I expect them to have had a good night's sleep and the smiles are back on faces."

United have moved back up to sixth in the Premier League table, eight points adrift of Chelsea and the final Champions League spot.