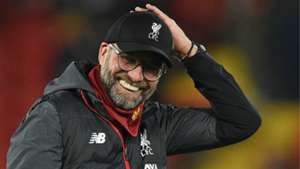 Jurgen Klopp has been hailed as the world's best coach by Salzburg boss Jesse Marsch, whose side are preparing to face Liverpool in a crunch Champions League clash.

Liverpool hold an eight-point lead at the top of the Premier League after 15 games, having missed out on the title by one point last season.

That disappointment was tempered by victory in the Champions League, as the Reds claimed their sixth European Cup title.

However, Liverpool could miss out on the last 16 of this season's competition if they slip to a defeat against Salzburg - who, spearheaded by Erling Braut Haaland, have impressed in Group E.

Former U.S. men's national team midfielder Marsch, who was an assistant at RB Leipzig last season after emerging as one of the best coaches in MLS during his time with the New York Red Bulls and took over at Austrian champions Salzburg in June.

Salzburg currently lead the way in the Austrian Bundesliga, and Marsch has lauded Klopp as world football's leading coach.

"I think you can fairly say that from the way his team is performing and the history he has in the game, and the way that he's had success in Germany and England.

"Trying to match up against his team is not so easy for us, especially when you talk about the talent that he has on the pitch. So what? We're going to play the game and it's going to be more about the two teams than it is about the two coaches.

"For me, it would not mean anything more to beat Klopp, it would mean a lot more for our team to be successful against this team, against Liverpool, against his team.

"That's the focus. I don't get too much into ego-driven, personal relationships. It's always going to be about our team and how good is our team on the day and how prepared are they."

Liverpool will be without Fabinho for Tuesday's encounter, with the midfielder having suffered an injury against Napoli which will keep him out until 2020.

Marsch, however, insists Liverpool will be no easier to play against.

"For me, Fabinho is one of their most important players. His ability to control the game with and without the ball and understand moments of the game is what makes them partly so good," Marsch said.

"They have so many good, quality experienced players that I don't expect them to miss him too much, but he's certainly a key player for them."