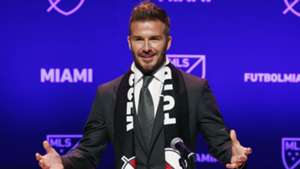 David Beckham spent five seasons in Major League Soccer, playing for the LA Galaxy where he won two MLS Cup trophies. The former England international now intends to return to U.S. soccer once again as part of an ownership group that will bring top-tier soccer back to Miami, Florida.

The Miami Fusion were the city's last MLS team, operating from 1997 to 2001, winning the MLS Supporters' Shield in their final season. However, since then, there has been no MLS team in the area, with the closest franchise operating in Orlando.

The newest MLS franchise, now known as Inter Miami, was confirmed as the league's 25th team at a press conference on January 29, 2018 and are set to make their worldwide debut on March 1, 2020 in Los Angeles vs LAFC.

Ahead of the team's debut in MLS, Goal brings you everything you need to know about Inter Miami, including where they will play and which players will play for them.

Beckham is just one owner of Inter Miami, and is part of an ownership group which was initially called Miami Beckham United, but now operates under the name Miami Freedom Park LLC .

When Beckham moved to the LA Galaxy in 2007, he received a purchase option from MLS which would allow him to establish a future franchise for $25 million rather than the usual $150M cost.

In 2014, he decided to exercise this option, and has been granted permission by Miami-Dade County to build a new stadium in downtown Miami.

It was announced on September 5, 2018 that the team will be called Inter Miami CF, which is short for Club Internacional de Futbol Miami.

Previously, the names Miami Vice and Miami Current were used when referring to the franchise in presentations.

The name Miami Vice was a reference to the 1980s television crime drama, which was re-made as a Hollywood film in 2006 with Colin Farrell and Jamie Foxx.

It had also been believed that Beckham might pay tribute to his playing career with Manchester United and call the team Miami United, but there was already a semi-professional team in the city with the same name.

U.S. website BigSoccer ran a poll in 2016 where fans could vote on the team's name, with 26 percent choosing International Miami or Inter Miami ahead of other options like Athletic Miami, Athletic Club Miami and AC Miami.

It is a name that reflects the multicultural diversity in the city.

The Miami team is just one of five new expansion teams as Major League Soccer looks to expand to at least 24 teams by 2020.

Miami will begin play in the 2020 MLS campaign in a temporary stadium, with their worldwide debut game being against LAFC in Los Angeles on March 1, 2020 to play the 2019 Supporters' Shield champions Los Angeles FC at 5:30pm ET / 10:30pm GMT.

They will host their first home game on March 14 vs the LA Galaxy at the new 19,000 seat Inter Miami CF Stadium in Fort Lauderdale, the club's home for the 2020 and 2021 seasons.

Inter Miami FC are currently without their own permanent stadium, though a date has been set for the opening of their new home in 2022.

The current proposal for an Inter Miami FC stadium is a 25,000-seat venue forming part of Freedom Park , a complex near Miami International Airport.

Approval for construction of the ground was granted through a public vote held in November 2018.

Plans include for the stadium to be built on 131-acre public land, including more than 1,000,000 square feet of combined office, retail and commercial space.

There are also plans to expand to the hotel industry, with 750 hotel rooms, 23 acres reserved for public soccer fields and the remaining 58 acres being turned into a public park.

Other locations in Miami were also being scouted, such as areas like Dodge Island at PortMiami, the Downtown Miami waterfront at Museum Park, and private sites in Miami's Overtown.

While Miami Freedom Park is being built, Inter Miami will use Lockhart Stadium - previously used by Fort Lauderdale Strikers and Miami Fusion - as their temporary base.

Beckham himself is now 42, so, unfortunately, he is probably too old to play for his own team. It is also unlikely that he will take up a managerial or coaching role with the team, preferring to stay behind the scenes with the other owners.

The club announced their first arrivals in Matias Pellegrini and Julian Carranaza in early August, with their third signing in Venezuelan youth international Christian Makoun on August 6.

"We are happy to add a young player with solid experience both in Europe and South America to Inter Miami's roster," Inter Miami sporting director Paul McDonough said in a statement.

"Christian is a grounded player of good character and maturity. He has shown us that he strives to represent himself and his home country at the highest level, and this is the mindset we want to build at Inter Miami."

Miami will also be allowed sign three designated players, whose salaries are not counted towards the MLS salary cap. When LA Galaxy signed him, Beckham was a designated player. They will also be eligible to take part in the MLS SuperDraft ahead of their first season, which sees expansion teams given the first overall pick.

Co-owner Jorge Mas explained that the candidates for the head coach role had "international experience", but a decision is not expected to be revealed until late 2019. A report from the Daily Mirror suggested that Carlo Ancelotti is top of Beckham's wishlist in regards to a manager, while Zinedine Zidane has also been linked, but both figures now seem unlikely candidates.

A number of global stars have been rumoured to be on Beckham's radar and the former Real Madrid player has hinted that he could bring some big names to the club.

"I've been doing a lot of vetting," Beckham told reporters in June 2019.

"We all know how great Miami is as a place to live with your family, but we don't want players just coming here at the end of their career thinking, 'Oh, let's go have a couple of years in Miami and I'll play a little bit of soccer.'

"That's not what we want. We want players who are hungry, who have played at the top level but still want to win.

The likes of World Cup-winning forward Antoine Griezmann has expressed willingness to be a part of Beckham's project, while Wayne Rooney and James Rodriguez have also been linked.

Recruitment of talent is a key part of any sports team and Inter Miami is no different. As well as tryouts, club scouts, coaches and officials will be on the hunt for new players for all age levels up to the senior team.

Inter Miami has already assembled a Development Academy Roster, which features players for the age groups of Under-12 to Under-19.

Players from local youth soccer club Lauderhill Lions were invited to join the academy in May 2019.

"It was really important for us when we got into this process to really focus on the youth players in South Florida," Inter Miami sporting director Paul McDonough said.

"We've been going out and scouting since last August and have visited many locations.

"We knew there would be some very good players out there that weren't playing on clubs due to the restriction on finances and we looked at different groups in South Florida."

Miami will become Major League Soccer's 25th team, with the league having expanded multiple times since its foundation in 1996. When it began, MLS had just 10 teams, but had expanded to 12 teams by 1998. Tampa Bay Mutiny and Miami Fusion both left the league in 2002 due to financial reasons, returning MLS to 10 teams.

Following the success of the United States at the 2002 World Cup, MLS began to grow again, with many more teams joining as it expanded multiple times. New teams joined every year between 2007 and 2011, and by 2016, the league comprised of 20 teams.

By 2020, the additions of Atlanta United, Minnesota United, Los Angeles FC and a new franchise in Nashville will see MLS have 24 teams competing for the title. In December 2017, the Nashville expansion team was announced as part of the next phase, with the aim of growing the league to 28 teams. The 24th team will play at the Nashville Fairgrounds in Tennesse, where there are plans to build a new 27,500-seat stadiu.

Miami will be the 25th team and will play their debut season in MLS in 2020. Bids have come from three other cities to complete the remaining teams for the 28-team expansion: Cincinnati, Detroit and Sacramento. There has also been interest from Indianapolis, Charlotte, Raleigh and Phoenix.