‘There is only one Ronaldo, the Brazilian’ - Zlatan takes another swipe at Cristiano 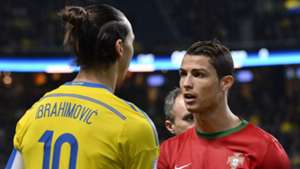 Zlatan Ibrahimovic has taken another swipe at Cristiano Ronaldo and claimed he is not the 'real Ronaldo', instead giving that accolade to the former Brazil and Real Madrid striker.

This is not the first time Ibrahimovic has been outspoken regarding the Portuguese star and earlier this year claimed Ronaldo's move to Juventus demonstrated a lack of ambition.

"I didn't say his transfer wasn't great. I said that it wasn't a challenge to join Juventus," the former Barcelona and AC Milan striker said in February.

"It's not a challenge to go to one of the best teams in the world. Maybe it depends on what you mean by challenge. For me, a challenge is joining a team and taking them far. That's a challenge."

In a continuation of that theme, speaking in a recent interview with GQ, Ibrahimovic was asked about the possibility of moving to Italy and finding the 'real Ronaldo' in Serie A.

"I will find the real Ronaldo in Italy?" the 38-year-old responded. "None of it. There is only one Ronaldo, the Brazilian!"

Ibrahimovic's comments come a few weeks after he left Cristiano Ronaldo out of his all-time XI, which, incidentally also did not include his Brazilian namesake.

The former striker also played a pivotal role for Brazil as they won the 2002 World Cup, and only Miroslav Klose has netted more goals in the history of the tournament.

As for Ibrahimovic, who played against Ronaldo during his time in Serie A, he is currently on the lookout for a new club, with rumours rife he is about to return to Italy with AC Milan.

"I'll see you in Italy soon," he joked earlier this week, before adding: "I will join a club that must get back to winning, that has to renew its history and is in search of a battle against everyone and everything."

The much-travelled attacker has been without a club since he left LA Galaxy last month and has been linked with a move to the majority of Europe's top leagues.