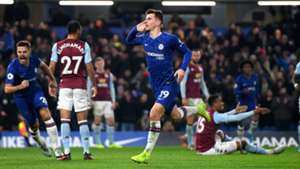 Everton will be hoping to bounce back from a humiliating derby defeat when they host Chelsea on Saturday.

The Toffees went down 5-2 at Anfield to drop into the relegation zone, with Marco Silva's job appearing to be hanging by a thread following a run of eight defeats in 11 games.

A visit from Chelsea is hardly likely to raise spirits around Goodison Park, with the Blues comfortably in the top four of the Premier League after beating Aston Villa 2-1 on Wednesday.

Everton have lost their last three league games and are 5/2 (3.50) shots to arrest that run with victory over Frank Lampard's men.

Chelsea are still without Antonio Rudiger and Ruben Loftus-Cheek but Ross Barkley could return against his former club. Tammy Abraham picked up a knock against Aston Villa but will hope to be fit by Saturday.

Djibril Sidibe was tactically substituted after just 35 minutes at Anfield and could miss out against the Blues, although the lineup could depend on whether Silva remains in charge for this fixture.

Despite scoring twice at Anfield, Everton looked largely toothless and only some poor finishing from Liverpool stopped the scoreline from being even worse.

The Toffees have now not kept a clean sheet in six games and will surely struggle against a Chelsea team with 19 goals away from home this season, which is the second-most in the league behind Manchester City.

In fact, Chelsea's defeat at Man City in their last away game was just their second of the campaign and ended a five-game winning streak away from home - form they should be able to re-find at Goodison Park.

Everton vs Chelsea Tips and Predictions

Given the contrasting form between these sides, it is surprising to see Chelsea offered at Evens (2.0) by bet365 and that offers excellent value ahead of this clash.