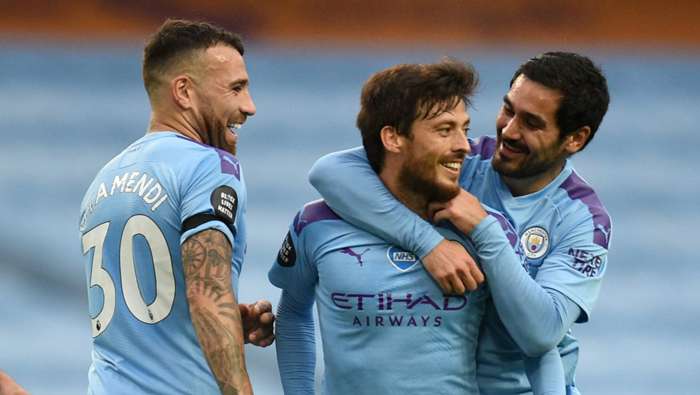 David Silva has paid an emotional tribute to Manchester City and the club’s fans, thanking them for their support throughout his decade of service to the club.

His final appearance for the club was in Saturday’s shock Champions League quarter-final defeat to Lyon in Lisbon.

City have already revealed their intentionto honour Silva with a statue outside the Etihad.They will also dedicate a training pitch with a bespoke mosaic to Silva at theirCity Football Academy.

Silva has now posted a message on Twitter, thanking the club and fans for their support through good times and bad, including when his son Mateo was fighting for his life after being born prematurely in 2018.

He also joked that he had grown used to Manchester’s notoriously wet weather and says he will continue to support the club from afar, with Serie A side Lazio rumoured to be frontrunners for his signature.

“The time has arrived. Ten years and 13 titles later, it’s time for me to say goodbye to the club that has left an indelible mark on my life and career,” he said.

“I look back and it’s clear I could not have made a better decision than to accept City’s proposal to join their project back in 2010.

“Manchester City and I have grown together. In 10 years, I have developed personally and professionally. I have celebrated many victories and titles and lived through epic moments.

“I have seen my lovely child, Mateo, born and I have even started to feel comfortable under heavy rain!

"City are a fantastic family. I won’t ever forget the way they threw themselves into helping me when I suffered the hardest moments of my life, offering me support and empathy.

“Precisely because of that I want to tell you it has been a real pleasure wearing the sky blue shirt and the captain’s armband of our club, sharing the dressing room with the best players and coaches in the world, and working closely with the finest club representatives and board members the game has to offer.

"And on top of that, all the time I had the backing of the amazing fans who have supported me always, through good and bad moments. You are really amazing.

"I hope that City will achieve even bigger triumphs in the future. I am going to support the team from a distance. I am so happy I have shared these unforgettable moments with the City family - you will always be in my heart.