'You took two away from me!' - De Bruyne happy to share Premier League assists record with Henry

'You took two away from me!' - De Bruyne happy to share Premier League assists record with Henry 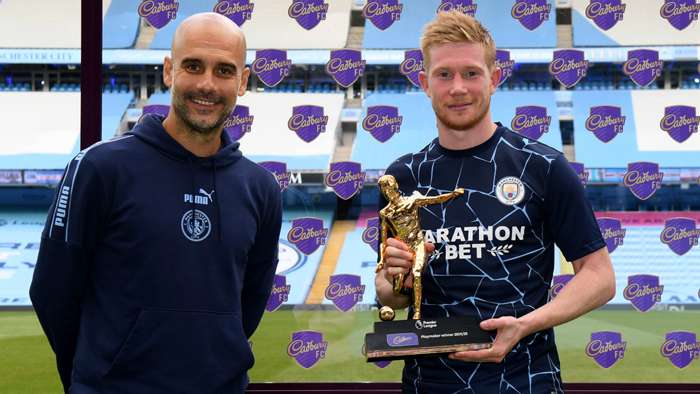 Kevin De Bruyne claimstwo assists were taken away from him, and that in his mind he had already beaten Thierry Henry's Premier League record for most in a season.

His part for Sterling's effort, City's third in their final game of the domestic season, was his 20th top-flight assist of the season, putting him level with Henry's benchmark for Arsenal in the 2002-03 campaign.

However, De Bruyne – perhaps tongue-in-cheek – feels a little short-changed, believing there were two other occasions he should have been given an assist.

The attacking midfielder put in a cross for Sterling to score against Arsenal in December that took a slight deflection, and also provided a throughball for the England international that hit David Luiz on the thigh against the same opponents in June.

"I have got two more – you guys took two away from me that I am still claiming so for me I was already above Henry," De Bruyne said about levelling the benchmark of a man who was his former assistant coach with Belgium.

De Bruyne is renowned as perhaps the Premier League's most consistent provider and had already gone close on several occasions to equalling the famed French striker.The midfielder recorded 18 assists in the 2016-17 season, and also managed 16 the following year - and also raced to 20 forWolfsburgin theBundesligaback in 2014-15.

In total, he boasts 66 assists in the English top-flight, as well as netting 36 goals from midfield for Pep Guardiola's charges.