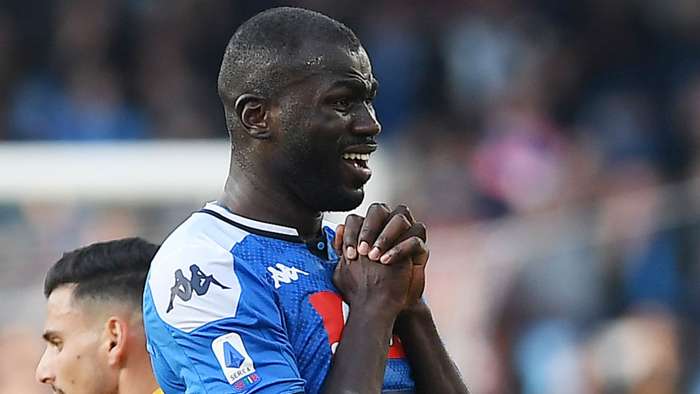 Napoli president Aurelio De Laurentiis has deflected questions over the future of defenderKalidou Koulibaly, saying that they should be answered byManchester United, Manchester City and PSG.

De Laurentiis was asked again aboutKoulibaly's future on Tuesday and instead directed the question towards a few of the only sides he believes can afford the Senegal star.

“You should ask Manchester United, City or PSG this question,” he said. “In other words, those who can afford to pay certain amounts."

Referring toKoulibaly and in-demand midfielder Allan, De Laurentiis sent out a warning to clubs he called "buzzards", who are looking to Napoli for a bargain.

“I see many buzzards on the transfers market," De Laurentiis continued. "You know who they are, they seem to be waiting to swoop in, but we have impenetrable armour and they won'tget what they want or at the prices they want."

Though he issued a warning on Tuesday,De Laurentiis did admit last month thatKoulibaly could be sold if his asking price is met.

"Kalidou is a great person, I would be terribly sad to lose him - but there is a time for everything, even to move apart,"De Laurentiis told Sky Italia.

As reports over a move to City continue to circulate, the club's former captainRichard Dunne tippedKoulibaly to join Pep Guardiola's side, a club he says still needs a leader to replace Vincent Kompany.

Dunne also said City should be interested in RB Leipzig centre-back DayotUpamecano, who impressed in his side's run to the Champions League semi-final.