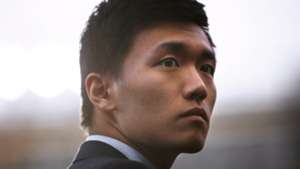 Inter president Steven Zhang has launched an impassioned criticism of Serie A president Paolo Dal Pino over his handling of the coronavirus crisis.

A number of Serie A fixtures, including Inter's title shoot-out with Juventus, had initially been scheduled to be played behind closed doors before being postponed until later in the season.

Now, Inter's game with Juve is set to be played on the evening of Monday, March 9, with an extra round of midweek matches over May 12-14 - a decision Inter aren't happy with.

Zhang wrote on his Instagram story: "Playing around the calendar and always putting the public health as secondary consideration.

"You are probably the biggest and darkest clown I have ever seen. 24 hours? 48 hours? 7 days? And what else? What's your next step?

"And now you speak about sportsmanship and fair competition?

"How about we don't protect our players or coaches and ask them to play for you 24/7 non-stop?

"Yes, I'm speaking to you. Our Lega President Paolo Dal Pino. Shame on you. It's time to stand up and take your responsibility! This is what we do in 2020!

"Everybody around the world, doesn't matter if you are Inter fan or Juve fan or no fan at all. Please be safe!

"This is the most important thing for you, your family, and our society."

On Sunday, a government decree extended the suspension of all sporting events in regions affected by coronavirus until March 8.

Serie A announced an emergency assembly to "examine the consequences the governmental measures related to coronavirus have had on the fixture list".

Inter chief executive Beppe Marotta has been critical of the league's handling of the disruption, suggesting the league season might not be completed as "the balance of the championship has been altered" with some teams seeing games postponed and others seeing theirs going ahead.

Aside from concerns directly related to the virus outbreak, there are worries over the physical and psychological effects on players if fixtures stack up before the end of the season.

All elite football competitions in the 2019-20 season must be completed by May 24 due to Euro 2020 coming at the end of the campaign.