Yazici opens up on following in Hazard & Pepe's footsteps at Lille 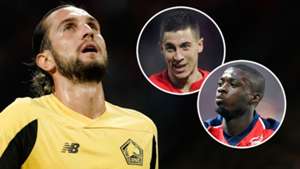 Lille ace Yusuf Yazici has explained his decision to join the French outfit from Trabzonspor last summer as he bids to tread the same path as Eden Hazard and Nicolas Pepe at Stade Pierre Mauroy.

Yazici signed a five-year contract with Lille back in August after being lured away from the Turkish side for EUR17.5 million (?15m/$20m).

The 23-year-old has since been trying to nail down a regular spot in Christophe Galtier's starting line-up, with Les Dogues currently fourth in the Ligue 1 standings.

The Turkey international has racked up 25 appearances across all competitions for Lille to date, including four Champions League starts. He is, however, currently sidelined with an ACL injury suffered in the 5-1 defeat to Monaco back in December.

Real Madrid star Hazard earned a move to Chelsea in 2012 after starting his career at Lille, and spent seven successful years in the Premier League before joining the Spanish giants.

Pepe, meanwhile, took in two seasons at Stade Pierre Mauroy before being snapped up by Arsenal for a club-record fee of ?72 million ($94m), with Lille now enjoying a strong reputation for developing talented young players with immense potential.

And Yazici has addressed whether Hazard and Pepe's respective spells with Lille influenced his final decision to join the club, while crediting sporting director Luis Campos for his role in the deal.

"Luis Campos was very effective in my decision to sign for Lille. Our president's and coach's insistence on me was a big factor too," Yazici told Goal .

"Lille have a reputation for discovering young talent and nurturing them onto the world stage. The Champions League was also a factor in my decision."

"Among them, there are sports psychologists, communication managers, career management executives... I always dream and I work to achieve my dreams.

"Dreaming makes one feel alive. And it keeps me motivated."

Yazici also revealed that he is currently undertaking both French and English lessons, before insisting the cold weather in Lille has been the only obstacle he has struggled to overcome since moving to France.

"For a football player, what you do off-field is as important as what you do on the field," he added. "For getting to know a country and its culture, you need to learn its language first. I'm taking French lessons in addition to my English lessons.

"I'm a person who can easily adapt to wherever I go. The only thing I have struggled with was the cold weather! Lille's very cold! But I got used to it too.

"People in Lille are very friendly and nice. The people in the club are also the same. My team-mates helped me a great deal too. I thank them very much for that."