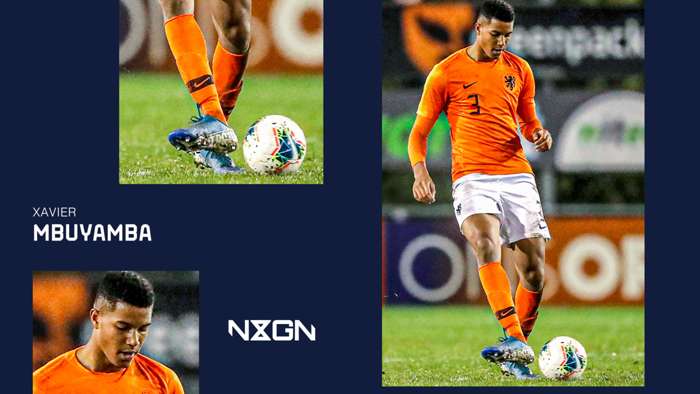 Given the many different ways young players can be scouted in the modern game, it is becoming an increasingly rare occurrence for a talented teenager to have slipped through the cracks.

The 18-year-old centre-back was never picked up by any of the Dutch giants during his footballing upbringing despite possessing attributes that have seen him compared by some to Virgil van Dijk.

He never earned a call-up to represent his country at schoolboy level either as he made his way through the ranks at second division club MVV Maastricht.

"It is strange that they never came, but the same applies to the KNVB," Mbuyamba said of the likes of Ajax and PSV when speaking toRTL."I was called up for the first time to the Under-19s squad in November 2019. The staff immediately said that they thought it strange that I had never been noticed before."

Mbuyamba, though, is quickly making up for lost time.

Scouts finally began to take notice of the 6'5" youngster after he made his senior debut at the age of 16, and by the summer of 2019 he was leaving his homeland behind to join Barcelona.

A year on, Mbuyamba is again on the move after cancelling his contract in Catalunya, with Chelsea close to securing a deal to sign him despite offers from four other Premier League clubs.

Born in Maastricht to a Congolese father and Dutch mother,Mbuyamba grew up in a footballing household, with he and his brothers, Noah and Nathan, all huge fans of the game.

Nathan now plays in the lower levels of Dutch football while Noah is aiming to become a Paralympic sprinter after his right leg was amputated following a scooter accident in Indonesia in 2017.

Xavier began his footballing education at amateur club VV Scharn before joining the Maastricht academy at the age of nine.

Seven years on in November 2018he made his senior bow as a late substitute against FC Volendam in what turned out to be the first of 11 appearances across the course of the 2018-19 season, three of which were starts.

Suddenly the offers began to come in. Mbuyamba was only signed to a youth contract at Maastricht, and despite them attempting to keep him on professional terms, they could not compete with the allure of some of Europe's top teams.

Chelsea were the first club to reach out having scouted the Netherlands extensively ever since their signing of Nathan Ake back in 2011.

Mbuyamba was invited to west London to train with Chelsea's youth teams in 2019, and despite impressing, the Blues were unable to register the youngster due to their FIFA-imposed transfer ban.

"You immediately sit with the first-team players during lunch and the club has outlined a very ambitious plan for Xavier. They really think that in one to two years, he can be in the first team."

Chelsea's failure to land the defender opened the door for other clubs. Barros claimed Real Madrid were keen while other reports suggested the likes of Liverpool, Bayern Munich and Celtic were also monitoring his situation.

But it was Barcelonaand La Masia director Patrick Kluivertwho won the race for Mbuyamba's signature as the former Netherlands striker led a recruitment drive from his homeland that also brought Ludovit Reis and Mike van Beijnen to the illustrious academy.

Having signed a four-year contract, Mbuyamba enjoyed a strong first season in Spainplaying as both a centre-back and right-back for Barca's U19s, and even spent time training with the club's first team.

"Frenkie de Jong looked afterme a little bit and said I just had to do my thing. I did that. It was a quiet workout, but I noticed that I was fine and I held up well.

"I sat next to Marc-Andreter Stegen and Lionel Messi. Then I took a few pictures on Snapchat and sent them to my friends.They were all very proud."

Despite making a good impression, Mbuyamba was dealt a set-back towards the end of his maiden campaign after Barcelona B's management team insisted that he would only be back-up for them heading into 2020-21.

That was not the development path that was laid out to the teenager upon his arrival, and as such he asked to leave, just as his close friend Louie Barry had done earlier in the year when the England youth international joined Aston Villa.

Barca initially put a€2 million (£1.8m/$2.4m) price tag on the youngster, but having requested he took a 50 per cent wage decrease amid the coronavirus pandemic, it was decided he would be released.

Juventus showed aninterest in signing him, but the Serie A champions were adjudged by Mbuyamba as having too many high-level centre-backs that would be ahead of him in the pecking order, and instead he now looks set to test himself in the English game at Chelsea.

Tall, blessed with speed and exceptionally comfortable in possession, Mbuyamba will arrive in west London knowing he will need to impress before he is handed a first-team opportunity by Frank Lampard.

He is willing to spend next season within the youth ranks at Cobham while he would also welcome a loan move, with Vitesse an option in Eredivisie.