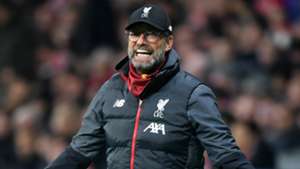 Liverpool almost have the Premier League title within their grasp, but club legend Jamie Carragher wonders whether one piece of silverware will be enough from this point given what the Reds have already achieved.

Jurgen Klopp's side have already got their hands on multiple trophies this season, with the UEFA Super Cup and Club World Cup added to an enviable collection at Anfield.

It is only a matter of time before a first top-flight crown in 30 years is wrapped up, despite an unwelcome setback having been suffered in Liverpool's last outing against Watford.

Carragher believes the Reds will want even more before the campaign is out, as they remain in the hunt for Champions League and FA Cup honours, with it important to make the most of dominant periods when they are enjoyed.

The Liverpool legend told Sky Sports: "I think there's a bit of a worry - not for the league, the league's won - it's actually is the league enough for Liverpool this season?

"The league feels like it's been won for two or three months. I know Jurgen Klopp wouldn't say that but it almost feels when you've had a season like that it doesn't feel enough, you still want one of the cups, whether that be the FA Cup or the Champions League.

"The worry is now Chelsea midweek and the following midweek is Atletico Madrid. If Liverpool go out of both cup competitions there's no way it will be a damp squib, because they've waited so long to win the title, but there will be a little tinge of how good this team is, the results they've had, they probably should win more this season."

Liverpool have wobbled a bit over recent weeks, with Klopp's side not as convincing since returning from their winter break as they were prior to it, but Carragher believes momentum will be established again after seeing a 44-game unbeaten league run ended by a 3-0 defeat at Watford.

"It wasn't losing, it was the manner of the defeat. It was really poor. And for the team at the top of the league to lose to the second bottom doesn't normally occur too often.

"People keep talking about Liverpool defensively and they were really poor but they never looked like scoring a goal in the game. And that was so surprising. So there's problems at both ends.

"But Watford thoroughly deserved the result and were well worth 3-0 as well. The performance will worry Jurgen Klopp more than the result.

"It was bound to happen at some stage. There's a lot of rejoicing from a Mr Neville, popping champagne and getting too carried away as you'd expect, but Arsenal fans are delighted as well because it saves the Invincibles record.

"But the title has been won for a couple of months and it's just when Liverpool were going to win it. There was a lot of hope from Liverpool fans that it would be at Goodison Park in a couple of weeks but the result on Saturday puts that to bed now and it may have to wait until the Man City game." Source : goal.com
Recommended News :