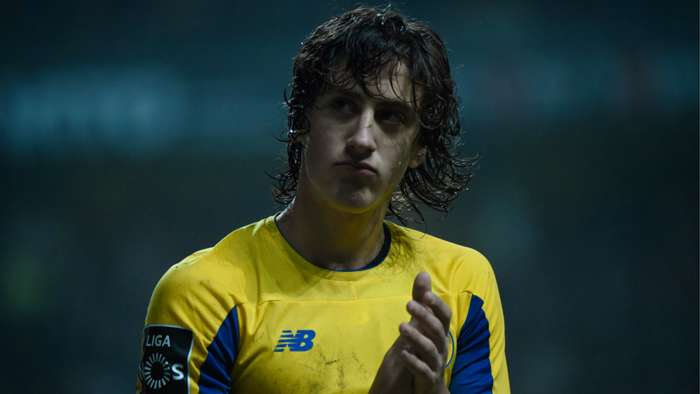 Wolves have completed the signing of highly rated teenage striker Fabio Silva in a club-record £35 million ($47m) agreement with Porto.

The 18-year-old becomes the latest Portuguese star to join the ranks at Molineux.

The deal to take him to England sees the ambitious Premier League outfit set a new benchmark with the most expensive signing in the club's history.

Mexico international Raul Jimenez was previously the club’s biggest buy, having been acquired for £30m ($40m) from Benfica, but another talented frontman has now raised that bar.

Big things are expected of Silva, who broke the record foryoungest player and goalscorer at Porto that new Wolves team-mate Ruben Neves once held.

He made his senior bow at the age of 17 and netted his maiden goal in a meeting with SC Coimbroes in October 2019.

Wolves have now invested heavily in his obvious potential and are delighted to have secured the services of a player with his best days ahead of him.

Executive chairman Jeff Shi told the club’s official website: “We’ve been following Fabio’s development for a long time. He’s a player that you only need several minutes to see his natural football talent. In recent years, Fabio has been developing very fast and now has proven himself in Porto’s first team, which is a top squad.

“Our head coach’s requirement for quality is very high, but he thinks Fabio is an important signing who will help the team immediately this season.

“The timing of this deal is similar to the timing of when we bought Ruben Neves; we’ve waited for the right time to get a high-quality player at the right price.

“Our recruitment team have been watching Fabio since he played for Portugal under-16s and they feel he has always been the best number nine coming through his age group anywhere in Europe.

“Fabio is a young player who shows not only incredible technical ability, but also his game intelligence for a player of his age is top class.

“He has the ability to drop in to link play and hold the ball up to bring others into play. He always then looks to get in the box and his movement and intelligence in the penalty area is as good as anyones.

“Fabio has the potential to be a generational talent and for us to see him develop under Nuno is very exciting. He is the type of player our fans will love.”

“Like all of our signings, this one is down to a lot of hard work, from a lot of important people, that support Nuno and I to make these things happen and help us to keep things moving.

“Even after an unprecedented pandemic, which has deeply impacted all football clubs in the world, our ambition and determination to improve and evolve the team continually never changes.

“The signing of Fabio demonstrates that we will make considerable investment when we feel it is right for the club.