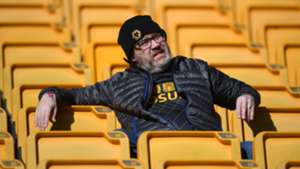 Wolves players have been given a temporary ban on taking selfies with fans as part of efforts to limit the chance of spreading the coronavirus.

The Premier League club have implemented measures to "reduce the risk of its community's health" after the UK government raised the level of public risk from low to moderate.

The steps include Wolves players and staff being told to avoid "any unnecessary meetings, lunches or public engagements, and temporarily avoid casual fan interaction such as selfies or autographs".

In a statement, the club explained: "Whilst we acknowledge that this will be disappointing for some supporters, we stress that this a temporary measure to protect the ongoing wellbeing of the Wolves squad and is a decision which has not been taken lightly.

"In addition, Wolves players and staff are also being instructed to avoid shaking hands where a warm smile and personal greeting will suffice."

Newcastle United announced last week that they were banning players from shaking hands in order to limit the potential spread of the virus.

Hand sanitisers are to be added to all entrances to Molineux and Wolves' Compton training ground, as well as dining tables and bathrooms.

The club also say they will take guidance from the Premier League, the government and the World Health Organisation (WHO) over the prospect of any fixtures being disrupted.

No matches have yet been postponed in England due to the threat of the coronavirus, but fixtures in Italy have been disrupted and all games in Switzerland's top two divisions have been cancelled until further notice.

Speaking on Tuesday, FIFA president Gianni Infantino urged associations "not to panic" and to take care when implementing control measures.

"Some of you have had to take important decisions in this respect. Every competition organiser has to study it of course and has to take decisions," he said at the UEFA Congress in Amsterdam.

"It is important to consider all the information from the authorities, but it's also important not to panic.

"Someone said to me football can be an antidote to coronavirus. I wouldn't go that far, but sometimes football is an antidote to many other illnesses like discrimination and racism, and this is a fight we need to fight all together."