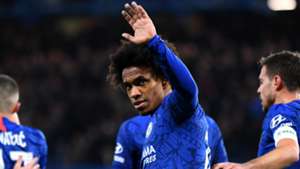 Willian remains unable to state with any certainty where he will be playing his football next season, with Chelsea yet to present the three-year contract offer that he is waiting on.

The Brazil international does have fresh terms on the table at Stamford Bridge.

As he is heading towards free agency, those in west London have sought to get the 31-year-old tied down on a new deal, but discussions have reached deadlock, with Willian holding out for a more extended stay.

It remains to be seen whether a compromise can be reached before the end of the season, and Willian's wife has already suggested that an association with Chelsea could be coming to a close.

She posted a video on social media saying that their time is ending, with hints taken from the fact that the couple's daughters were dressed in red, while Willian has been linked with a move across London to Arsenal.

He is reluctant to be drawn on such speculation, with no decision on his future taken as yet, but concedes that everything remains up in the air at present.

Willian told ESPN Brasil when asked about his situation in the wake of a 4-0 victory over Everton in which he scored: "We really like London, I have said it many times.

"It is a city where my family and I love to live. I don't know why she [his wife] published this post, but the contract situation really isn't easy.

"Chelsea offered me two years, I asked for three years and everything stopped there."

Willian has stated on a regular basis in the past that his preference would be to prolong his stint at Chelsea.

He has, however, been heavily linked with the likes of Arsenal and Barcelona, while a return to his roots has also been mooted.

Willian has revealed that he intends to remain in Europe whatever happens from this point, with Esporte Interativo told in October 2019: "Of course when you talk about Corinthians, the club that launched me, I have a great affection. But honestly, I don't think about returning to Brazil.

"I think I have a lot of wood to burn here in Europe. I have a market.

"I'm very happy here at Chelsea. Of course my contract is ending now, at the end of the season it's over. But I'm happy at Chelsea and I plan to stay here."

Willian may not see that wish granted, but there is still time for Chelsea to add a further 12 months to their offer and bring any uncertainty around a proven performer to a close.