‘Willian’s not done it while Pepe is hot & cold for £70m’ – Arteta will want to add at Arsenal, says Smith
Match

‘Willian’s not done it while Pepe is hot & cold for £70m’ – Arteta will want to add at Arsenal, says Smith 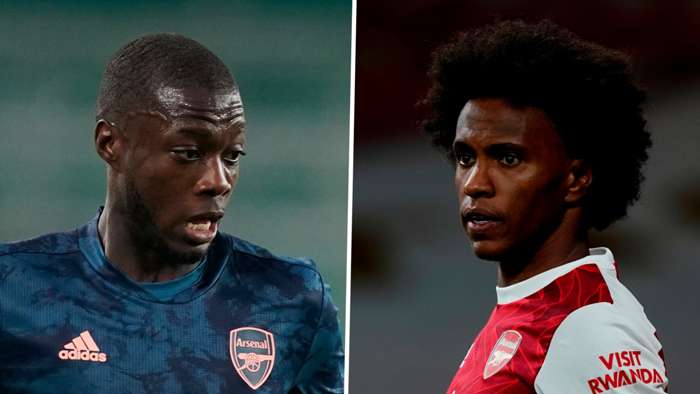 Arsenal will be looking to bolster their attacking ranks in upcoming transfer windows, says Alan Smith, with Willian struggling for a spark at Emirates Stadium and Nicolas Pepe continuing to blow “hot and cold”.

Smith believes those issues will lead to the Gunners spending again, with greater firepower required despite the potential that promising youngsters Gabriel Martinelli and Eddie Nketiah possess.

The former Arsenal striker told Sky Sports: “I'm sure Mikel Arteta would like to add to the players he's already got

“Willian's come in and not quite reached the levels he had at Chelsea, Pepe is hot and cold, for £70-odd million, that's been a disappointing signing so far, Alexandre Lacazette hasn't kicked on from his first season as well.

“Eddie Nketiah is a little inexperienced to lean on week-in, week-out, and Gabriel Martinelli is still a way off, as good as he is. So, that is an area that Arteta might be a little worried about.”

Smith added on Aubameyang, who has just four goals to his name across all competitions this season: “There's still some concerns, Pierre-Emerick Aubameyang isn't quite himself, I think he's only got one in open play this season, and that's just not him.

Arteta’s side suffered a 3-0 home defeat to Aston Villa prior to the November international break, with hard work on the training ground being undone in that contest.

Smith said of the areas that Arsenal have been focusing on, as they seek to get back to winning ways away at Leeds on Sunday: “The accent there on the training ground has been on organisation, defensive resolve, not being an easy touch, which he has certainly achieved.

“Villa beat them convincingly on the night before the international break, but this season you know what you're going to get defensively from Arsenal.