Will Timo Werner get a medal if RB Leipzig win the 2019-20 Champions League?

Will Timo Werner get a medal if RB Leipzig win the 2019-20 Champions League? 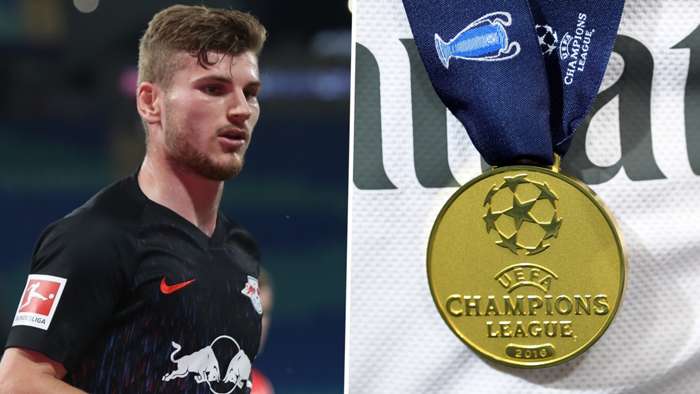 Chelsea secured one of the summer's biggest signings when they completed the transfer of strikingsensation Timo Werner from RB Leipzig.

In twist of fate, however, Werner will have to watch from afar as his former side RB Leipzig progress deep into the last four of the Champions League - as his current club Chelsea were knocked out at the round of 16 stage at the hands of Bayern.

So could Werner still be named a Champions League winner with Leipzig?

Werner could receive a winners'medal should RB Leipzig win the Champions League as he already made eight Europeanappearances for the club before transferring to Chelsea.

UEFA's rule awarding of winners' medalsis ambiguous, however, with the club making the final decision on which players receive individual honours.

Section 11.03 in the2019-20 edition of UEFA Champions League regulationsstates: "The winning team is presented with 40 gold medals and the runner-up with 40 silver medals. Additional medals may not be produced."

UEFA do not have set regulations on how many appearances a player must make in the competition in order to earn a medal.

The tournament functions differently than the likes of the Premier League, which states that since the2012–13 season, a player must have made a minimum of five appearances in order to qualify for a Premier League medal. Previously, the minimum number of matches was 10.

Werner left the Bundesliga side for Chelsea in a deal that was completed before the 2019-20 Champions League season finished, as football was suspended due to the Covid-19 pandemic.

The forward certainly contributed to RB Leipzig's progress in the European competition, making eight appearances andnetting four goals, but it is up to his former side to decide if he will receive a medal.

RB Leipzig have emerged as the runaway underdogs in this year's competition, defeating Tottenham and Atletico Madrid to secure a place in the Champions League semi-finals against heavy favourites Paris Saint-Germain.