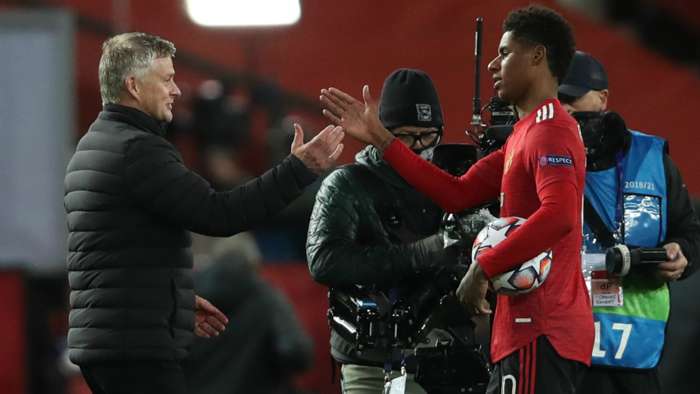 Ahead of Wednesday's clash withIstanbul Basaksehir, Ole Gunnar Solskjaer was asked if Manchester United should be considered as one of the favourites for this season’s Champions League.

In the same press conference,Solskjaer found himself having to explain his side’s inconsistent form - losing to Arsenal in the league just four days after hammering one of last season’s Champions League semi-finalists RB Leipzig5-0 at Old Trafford.

While it may look like his side have a problem getting results at home, having failed to win any of their four home league fixtures this season and enduring a run that now stretches to six going back into last season, it goes deeper than that.

They have struggled to beat teams that sit deep and defend, like Crystal Palace and Chelsea did, and alsoteams thatpress them intensely in the way Arsenal did on Sunday.

Some teams are happy to come away with the point in the league against United andwill put 11 men behind the ball andstifling their counter-attackingthreat -their only method of attack.

The midfielddiamond, which had been so effective in the Champions League on Wednesday, was a disaster against Arsenal with a lack of width damaging United’s attacking flow and poor individual displays resulting in a failed system.

However, as the team yo-yo between competitions there’s an opportunity for another reprieve in Istanbul. It wouldn’t be a surprise to see them make it three wins from three in a group some observers thought they might struggle to escape.

The Champions League and the other cup competitions suit Solskjaer’s style of play; as teams come forward in search of a goal,they leavegaps at the back that Marcus Rashford, Anthony Martial and Mason Greenwood can raid into.

It’s not a tactic that needs much masterminding, but it has proven to work well in big one-off games for the Norwegian.

Solskjaer said the 5-0 result last week againstLeipzig didn’t tell the whole story of the game - that it was a closer contest than the scoreline suggested -but his team were able to exploit the space with their pace and, later,the fresh legs of Rashfordas the Germans went chasing the gameafter Greenwood’s opener.

And while counter-attacking has been the key to United’s forward play, the way they operate also requires a solid backline to soak up thepressure.

After shipping six against Tottenham, they have conceded just three goals in the five fixtures since. Where the back line looked weak in the opening games, man for man theyhave stepped up to the occasion following the international break.

“I feel like since the international break defensively we have been really good haven’t conceded many chances at all,” captain Harry Maguire told reporters in the pre-match press conference.

“Defensively, we feel like we’re on the right track but we need to get the balance right and that’s our job as well in terms of the attacking shape and the balance of defending and attacking.”

If United can continue to find that balance in the Champions League and continue to rise to the occasion on those one-off European nights then it’s likely they could have more success in the competition than in the Premier League.