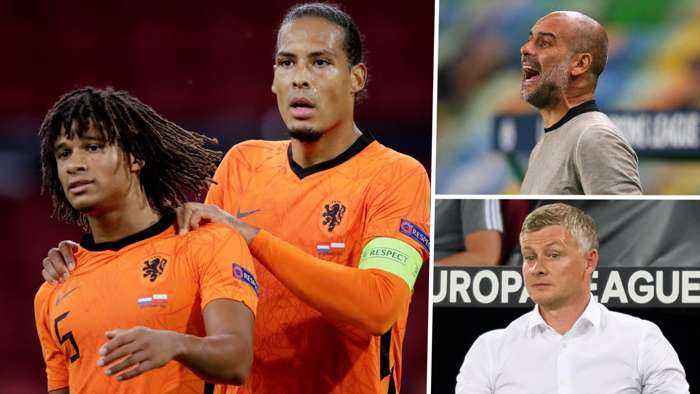 It’s not often that a just-relegated centre-back, whose side conceded 65 league goals, is wanted by the two richest clubs in England.

Ake has attracted so much interest because he is a left-footed centre-back, a commodity so rare in the modern game that managers are willing to overlook an awful lot – like, say, being the most important member of a hopelessly porous defence.

“We need a left-footed centre-back, so keep going,” Ole Gunnar Solskjaer was overheard saying to Ake after United’s game against Bournemouth in July. “Keep going” is quite the statement to give a centre-back whose team was just beaten 5-2.

That is largely thanks to several Premier League managers – namely Solskjaer, Pep Guardiola, and Mikel Arteta – talking openly about the importance of the position, and the transfer activity it has sparked this summer.

Arsenal have signed Gabriel from Lille in what could be a game-changer for Arteta’s side, while Man Utd, having lost out on Ake, are increasingly linked to left footers like Samuel Umtiti and Borussia Dortmund’s Dan-Axel Zagadou. Here’s why they’re so important in the modern game.

Possession-centric sides like Arsenal or Man City work tirelessly on the minutiae of their attacking moves. Things are rarely improvised, and the set moves repeated in training are controlled and analysed down to the smallest angle of a pass or the slightest twist in body shape when taking the first touch.

After all, when you’re dividing the pitch into multiple zones and progressing the ball in exacting triangles, every moment, every touch, and every opening angle becomes crucial. Making the right style of ten-yard pass in your own half can be the difference between an incisive attack developing and stagnant possession – the ball having to be rolled back and forth as you wait for the ball-progression chance to come round again.

Having a left footer on the left of a centre-back pairing makes all the difference.

First, the simple pass out to the left flank is at a slightly different angle; a right footer will be passing it diagonally on the inside of the flank, open to being intercepted by a pressing opposition player, whereas a left footer can essentially curl the ball out and in, creating a cleaner U-shape across the back.

It’s a tiny detail, but a crucial one. If your left-sided centre-back cannot open their body out for a comfortable left-footed pass then most likely they will end up turning and going back the other way. That stutters the rhythm, shuts down the entire left flank, and makes you more predictable to play against.

Centre-backs are increasingly expected to make line-splitting passes, too, and again this is more difficult with your right foot on the left side.

To hit a ball between the opposition forwards and break the lines one needs to be aiming for the outside of the shape; an ‘inverted’ position means your only available angle is back across the body of the opponent, which is far easier to intercept.

More often than not, right-footed left centre-backs simply do not have the ability to carry the ball diagonally left, opening up the narrow passing lane into a midfielder.

The problem also extends to being able to chip a ball down the line for the left-back, who is less likely to receive the pass if it is curling out towards the touchline than if curling infield.

Even when receiving a pass from their centre-back partner, a right-footed left centre-back can show awkwardness, since it is not instinctive for them to open their body out and continue the ball’s direction towards the left flank. Instead, they often have to clumsily come infield and give it straight back to their partner.

It bears repeating that while this is simple stuff – perhaps even a little obvious – it is crucial for any tactically diligent manager who studies their team’s attacking moves like a chess player thinking three steps ahead.

Football is increasingly a territorial battle for the elite clubs, a game of patient possession in which they must work tirelessly on positioning and movement to prise apart a deep-lying defence. And so, when the ball meanders back and forth across the defensive line, it is often lost on us just how frustrating – how unplanned – this activity can be, and just how much the pitch would be opened up by the simple shift from a right footer to a left footer.

The fact that the top clubs often have more than 65 per cent possession during a game has also affected how centre-backs defend.

Full-backs are playmakers these days, with the knock-on effect of centre-backs splitting wide as a defensive midfielder drops to make a back three. We all know how important it is to have a left footer at left-back – and that’s precisely the role a left-sided centre-back now regularly finds himself in the Premier League.

Whether showing a winger down the channel, throwing a leg out to make a block, sticking a boot in to pinch the ball, or going to ground with a slide tackle, defenders use their dominant foot far more than their weaker one.

One-on-one defending is instinctive, and it’s a technical craft that requires the same level of skill and quick thinking as a poacher’s finish, which is why feeling compelled to lead with the foot furthest away from the left wing can be problematic.

Therfore, someone of Ake’s quality – very good, but not world-class – can find himself hunted by two of the biggest clubs in the world.

It also explains how Tyrone Mings – a decent defender but arguably not even Aston Villa’s best centre-back – finds himself in the England squad, where Gareth Southgate has so few left-footed options.

Mings may even find himself on Man Utd’s radar in the future. If not, then Zagadou, Umtiti, Presnel Kimpembe, or Alessio Romagnoli could soon be playing in England.

Man City, meanwhile, now have two left-footed centre-backs. Back in January Guardiola told reporters that Aymeric Laporte’s return was important chiefly because in his absence “there are many actions to build up – to make our play quicker, better – but we can’t do them.”