'Who am I to change him?!' - Ex-Barcelona coach Setien admits Messi is 'difficult to manage'
Match

'Who am I to change him?!' - Ex-Barcelona coach Setien admits Messi is 'difficult to manage' 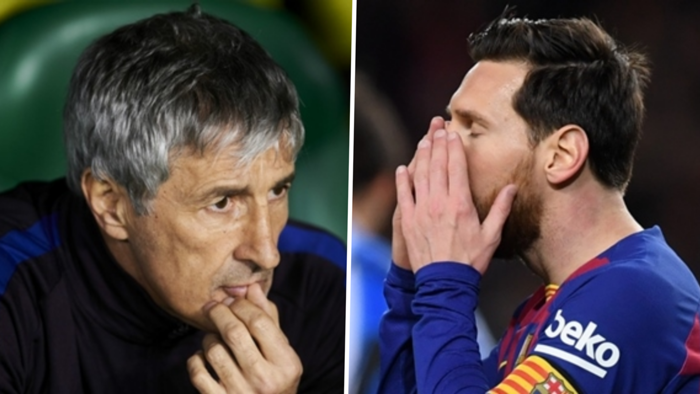 Former Barcelona head coach Quique Setien believes Lionel Messi is hard to manage, addingthat the Argentine's enormous reputation meant he was difficult for thecoach to criticise while in charge at Camp Nou.

Setien took over Barca in January after the club sacked Ernesto Valverde, but the ex-Real Betis manager lasted just over six months in the post beforehe too was relieved of his dutiesin August.

Barca's stunning 8-2 defeat in the Champions League was the final straw for Setien, who completed a season at Camp Nou that saw the club fail to win a trophy.

After the season Messi stunningly attempted to engineer a way out of the club, before ultimately withdrawing his request when it became apparent he would be forced into a legal battle with Barca.

In an interview with former Real Madrid and Spain coach Vicente del Bosque forEl Pais,Setien spoke about the difficulty of managing a player like Messi – winner of six Ballon d'Or awards and someone Setien considers the greatest to ever play the game.

"I think Messi is the best of all time," Setien said."There have been other great players who have been great, but the continuity that this boy has had throughout the years has not been had by anyone.

"Leo is difficult to manage. Who am I to change him! If they have accepted him as he is for years and have not changed him.

"There's another facet beyond just the player and it's more difficult to manage. Much more difficult. It's something inherent in many athletes that can be seen in the Michael Jordan documentary ("The Last Dance"). You see things you don't expect.

"He's very reserved but he makes you see the things that he wants. He doesn't talk much."

Setien believes that in hindsight, he would have been better off making decisions with the club as a whole in mind, rather than any individual players.

"After leaving what I am clear on is that at certain times should have made other decisions, but there's something above you: the club.