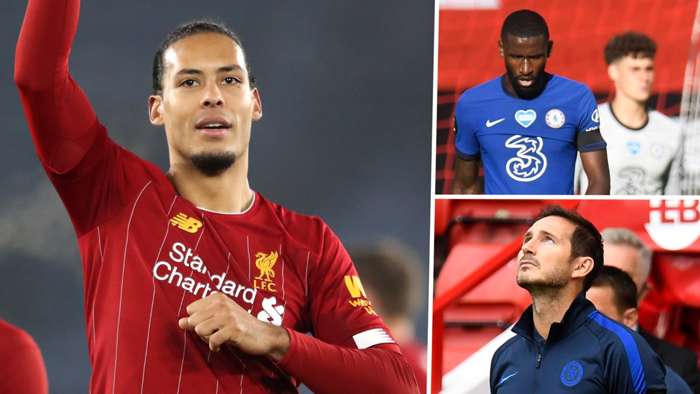 Despite the game mattering far more to Chelsea than it does to Liverpool, the Blues will arrive at Anfield on Wednesday in the role of uninvited guests at a private party.

Chelsea, of course, know a win would be enough to secure a top-four finish and Champions League football for next season.

However, Frank Lampard has designs that far outstrip just jostling for position below the leaders. Next season, Chelsea want to be competing with Liverpool, Manchester City and whoever else for the title.

With that in mind, the Blues are well on their way to being the biggest-spending side in England this summer – if not Europe– and the early signs suggest that Lampard is looking to build a squad in Liverpool's image.

The arrivals of Timo Werner and Hakim Ziyech, as well as the pursuit of Kai Havertz, suggests Lampard wants a fluid, free-scoring forward line in the same mould as Mohamed Salah, Sadio Mane and Roberto Firmino.

It could even be argued that, with the likes of Christian Pulisic, Callum Hudson-Odoi and Tammy Abraham already at the club, should Havertz join from Bayer Leverkusen, then the Blues would outstrip the Reds in terms of firepower.

In goal, too, Lampard is looking to follow Liverpool's lead.

Manager Jurgen Klopp quickly realised that Simon Mignolet was not up to the task at Anfield, and after Loris Karius failed in spectacular fashion, the Reds forkedout a world-record fee to bring Alisson Becker in from Roma.

The Brazil international slotted in seamlessly, with some now suggesting that he is the best goalkeeper in the world.

Of course, it was Kepa Arrizabalaga who quickly usurped Alisson as the most expensive shot-stopper in history, with Chelsea paying £71 million ($91m) for the Spaniard's services just a few weeks later.

It is fair to say the former Athletic Club ace has struggled to justify his lofty fee, which is why the Blues are considering a move for Atletico Madrid number one Jan Oblak, though they would have to break the record again to sign the Slovenia international, given his release clause stands at€120 million (£110m/$137.5m).

Should they secure an upgrade on Kepa, then almost all the pieces of his Liverpool-esque jigsaw will be in place. Lampard would have the firepower andthe top-quality goalkeeper he requires to mount a title challenge, while he would arguably be in possession of a a midfield with a higher ceiling than that available to Klopp.

Complete a move for primary left-back target Ben Chilwell and you could even squint and mistake he and Reece James for Andy Robertson and Trent Alexander-Arnold.

There is one piece missing, though. And unfortunately for Lampard, it isthe most important.

Virgil van Dijk's arrival at Liverpool in January 2018 truly was a game-changer.

Klopp's laser-focused pursuit of the Netherlands international – which included a secret meeting in Blackpool, where the German coach's plans were outlined to Van Dijk– was questioned by some, particularly when it was revealed he was willing to part with£75m ($96m) to sign the Southampton centre-back.

"We watched all of them 500 million times, butwhat if the new player doesn't hit the first ball and he makes exactly the same mistake?" Klopp said in 2017, after being accused of being too obsessed with signing Van Dijk rather than looking into other options.

"It is not that we ignore them. I said if there would have been a solution out there, we would have done it. I had to make a decision and the decision was our boys are not worse than them."

The return on his commitment to Van Dijk has been massive. European, world and now English champions, Liverpool's backline has benefited enormously from the ex-Celtic star's leadership and poise, helping them go from error-strewn to watertight.

Then-Chelsea boss Antonio Conte was left frustrated to have been beaten to the punch by Liverpool and Lampard must now be ruing Van Dijk's move to Merseyside, given his defence struggles to keep even the Premier League's most mediocre attacks at bay.

The Blues have conceded moregoals than any other team in the top half of the Premier League this term (49), while also conceding more headed goals than the entirety of the division.

Though academy graduate Fikayo Tomori has been tied down to a long-term deal, neither Antonio Rudiger nor Andreas Christensen have begun talks with the club regarding new contracts despite having less than two years left to run on their current deals.

Reports in France, meanwhile, claim that Kurt Zouma has been recently offered to Paris Saint-Germain by his agent.

All signs point to Lampard being in dire need of a Van Dijk-like figure and yet Chelsea have not been linked with any central defenders ahead of the summer market, albeit with the caveat that one of their transfer targets, Declan Rice, has occasionally played at the back for West Ham.

So, why can't Lampard find his own Van Dijk to transform his defence? Quite simply, there is nobody available who fits the bill.

Kalidou Koulibaly is a name that a number of fans bring up, with the Napoli defender potentially available this summer. Chelsea, however, do not want to spend big money on a player who will turn 30 next June.

Younger options, such as Inter's Milan Skriniar and Bayern Munich's David Alaba, will likely be too difficult to prise from their current clubs, while Dayot Upamecano, who at 21 would be something of a calculate gamble, is now set to stay at RB Leipzig as the Bundesliga club try to avoid any more star names following Werner's departure.

That leaves Chelsea in a position where theiroptions are only as good as the players they currently have, and they are not keen to make signings that fall below the level required just to fill apparent gaps in their squad.

Kepa, Marcos Alonso, Danny Drinkwater and Davide Zappacosta were all brought inin recent years because other players turned Chelsea down. It is not beyond the realms of possibility that all four could be sold by the time next season starts.

"They’ve had some seriously good recruitment in the areas that the manager felt they need strengthening," Lampard said of Liverpool's recent recruitment ahead of Wednesday's clash.

"I think they have been very smart about how they’ve done that, and whilst doing that you continue to work on trying to improve players. Players that you have brought in and players already at the club. Van Dijk, Alisson, Mo Salah, Fabinho, Mane are all incredible individuals in their own right."

Lampard is assembling his own group of incredible individuals, with Chelsea'srecruitment drive showing no sign of slowing down.