What does Inter mean in football? Milan, Miami and famous team names explained 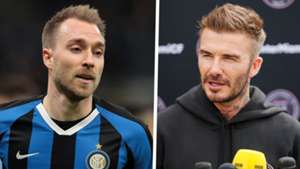 The suffixes and prefixes of football clubs are diverse, but some are used more commonly than others, including 'Inter'.

In English-speaking countries, suffixes such as 'United' and 'Rovers' are among the most obvious, but 'Inter' has a more global appeal, appearing in places such as Italy, Brazil and the United States among others.

Three-time European champions and Italian behemoths Inter are the most famous example and have served as the inspiration for other clubs across the world, not to mention five-a-side groups.

But what does it actually mean? Goal takes a look at the history of the team name Inter and the various examples around the world.

What does 'Inter' mean in football?

In football, the team name Inter is usually an abbreviation of the word 'International' (sometimes spelled Internacional or Internazionale, depending on the language used).

The name denotes an outward-looking club ethos which embraces players, members and fans of all nationalities regardless of the country the club happens to be domiciled in.

The founding members of Italian club Inter were formerly involved with AC Milan, but started their own club in protest at the perception that Italian players dominated the Rossoneri.

The breakaway founders - who hailed from Italy and Switzerland - chose the name Internazionale, because, they said, "we are brothers of the world".

Which football teams are called Inter?

Of course, David Beckham's MLS franchise Inter Miami is the newest kid on the block, having been established in 2018 and entering MLS competition for the first time in 2020. The full name of Beckham's team is Club Internacional de Futbol Miami.

There are a number of clubs in Brazil called Internacional, the biggest and most successful are SC Internacional from Porto Alegre in the south of the country.

Germany boasts International Leipzig or Inter Leipzig for short. The club was founded in 2013 and competes in the lower tiers of the German football pyramid in the shadow of RB Leipzig.

The UK once had a team called Inter Cardiff, which competed in the Welsh leagues, but it merged with Cardiff Metropolitan University and the name Inter was dropped completely in 2009.

Inter Bratislava is a famous club from Slovakia, while Inter Zapresic compete in the Croatian league.

Inter Baku was the name of Azerbaijani side Keshla FK from 2004 until 2017 when financial woes led to the demise and rebirth of the club.

In 2019, Serie A side Inter engaged in a legal dispute with newly formed MLS side Inter Miami over the use of the name 'Inter'.

The Italian club have been paying close attention to the developments of Inter Miami and have been strident with the US Patent and Trademark Office regarding the use of the name 'Inter', having filed a patent application in 2014.

However, despite the possibility of a name-change being forced in future, Inter Miami co-owner Jorge Mas stressed in early 2020 that he and his business partners were not worried about the dispute.

"This issue has nothing to do with Inter Miami the name, it has to do with exclusively with 'Inter', that one word," said Mas.

"Regardless of the outcome, Inter Miami will be here hopefully for 50 to 100 years. We're not concerned with the trademark issue whatsoever."