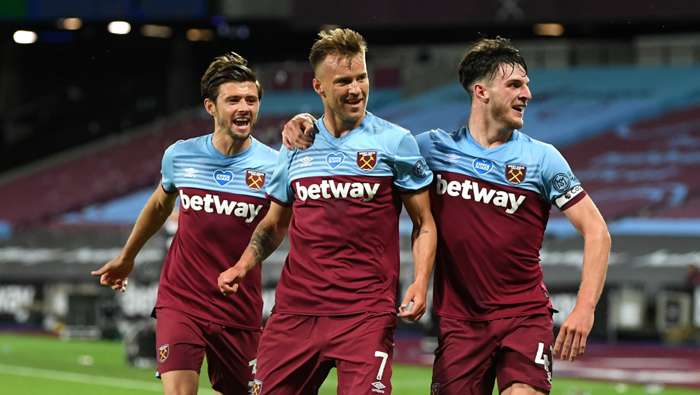 West Ham will be looking to pick up a crucial three points when they welcome Burnley to the London Stadium on Wednesday evening.

The Hammers are lingering just four points above the relegation zone, but will be in good spirits after a 2-2 draw at Newcastle United gave them a two-match unbeaten run for the first time since September.

It will not be an easy task at home to Burnley, though, who have gone three games without defeat and are still in withan outside chance of claiming a Europa League spot.

Burnley have won six of their last 11 Premier League games but are 16/5 (4.20) outsiders to beat the Hammers for the third time in a row.

These sides have not played out a draw in any of their last four meetings and bet365 offer 13/5 (3.60) that they share the points.

Mark Noble came off the bench in the 2-2 draw at Newcastle and should start this one, whileAndriy Yarmolenko will be vying for a place as David Moyes looks set to rotate with this game just three days after their previous game.

Sean Dyche, too, will likely make some changes, with Chris Wood in line to make his first start since the resumption of the league, although Ben Mee is a doubt.

West Ham looked to be in a real relegation fight just two weeks ago but the stunning victory over Chelsea followed by thedraw in Newcastle has seen them move four points clear with a favourable run-in.

Another win will likely secure the Hammers’ Premier League status, but this could prove to be a difficult outing with only Liverpool having taken more points than Burnley in the last 11 games.

Indeed, Dyche’s men have lost only once in that time, a 5-0 defeat at Manchester City, and will no doubt make things difficult as they look to finish the season strong and keep themselves in contention for the Europa League.

Burnley have kept things tight at the back recently and have conceded just once, but with West Ham in fine goalscoring form, there could be value in backing both teams to score at 4/5 (1.80) with bet365.

The Hammers have not kept a clean sheet since New Year’s Day, 14 matches ago, but five goals in their last two outings means they should be able to get on the scoresheet as well.