Werner and Havertz will benefit from Chelsea moves, says Marsch

Werner and Havertz will benefit from Chelsea moves, says Marsch 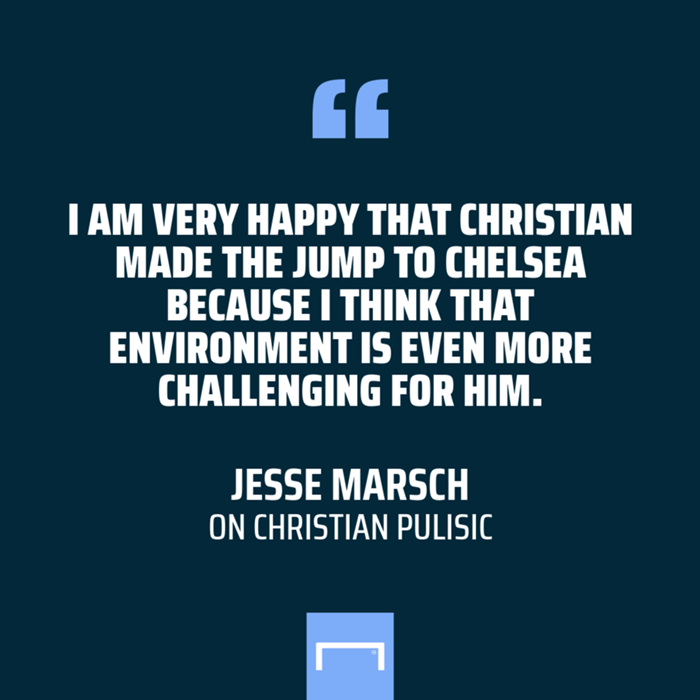 Red Bull Salzburg coach Jesse Marsch is confident that Timo Werner and Christian Pulisic will form a lethal partnership at Chelsea next season.

Marsch previously worked with Werner at RB Leipzig and the striker joined the Blues from Salzburg's sister club in a deal worth £47.5 million ($59m) earlier this summer.

After deciding against competing in the knockout stage of the Champions League with his former team, the Germany international will be available for selection for Chelsea's opening Premier League game of the season, on 14 September away at Brighton, along with fellow new signing Hakim Ziyech, who has arrived from Ajax.

Marsch is in no doubt that that the Blues have got themselves a bargain, as the American coach feels that Werner is just as suited to English football as Pulisic, the former Borussia Dortmund winger who went from strength to strength last season.

"Timo is an incredible talent and an aggressive attacker and a great scorer and an intelligent footballer," Marsch toldGoalabout the former Leipzig striker. "Chelsea for a relatively cheap price have picked up a world-class player.

"I am really excited for Timo because a lot of Germans don’t leave. I am really excited that Timo is moving outside of his comfort zone to challenge himself at a different level and I think that he will be rewarded for it in his career.

"He is a cut-throat attacker and the potential for him and Christian to be a good pair is really, really high."

Marsch believes that, like Werner,the 21-year-old attacking midfielder will benefit from a Premier League transfer: "Havertz is another player that I think needs to get out of his comfort zone and he has major potential.

"What I learned about Germans is that they don’t like being out of their comfort zone; they like defining things, having rules and being uncomfortable is not always the best thing.

"I really think the more talents that challenge themselves in a different culture will be rewarded for it."

Amid all of the excitement over Chelsea's new signings, the form of the 21-year-old U.S. Men's National Team captain Pulisicafter the coronavirus-enforced break is also cause for optimism.

Pulisic starred for Frank Lampard's side during the closing stages of the 2019-20 campaign, until suffering a hamstring injury in the FA Cup final defeat to Arsenal.

He thinks that the young duo is destined to achieve great things in the European game and will, thus, inspire young players across the U.S. to fully believe in themselves.

"I know Tyler much better than Christian but they are very close friends," Marsch continued. "I have spoken to Tyler about Christian and I have met Christian a number of times. What makes these two young talents very special is their fearlessness. They have self-belief.

"The beauty of it is not arrogance, it is just steeped in deep confidence and their belief they can be the best. They came to Europe at young ages to test themselves, show and challenge themselves. They have been rewarded for it, both of them.

"They are both still 21 years old. The future is bright for both of them. I am very happy that Christian made the jump to Chelsea because I think that environment is even more challenging for him.

"I know Tyler Adams well andhe is only getting better;growing and he is going to be a bigger leader, player and man. I am excited to continue to see them grow.

Recent successes amongyoung USMNT players in Europe comes after the team failed to qualify for the World Cup in 2018.

There is increased hope that the next generation can put things rightbut Marsch believes that his country paid the price for dropping the ball in player and coach development.

"The number one purpose I have right now is as a fan and supporter, whether that’s for the entire national team programme or for Gregg Berhalter, the coach is to help our national team get back to being successful," he explained.

"I'm often asked about my involvement or my future. If the U.S. national team calls me at any point or any day, then I will take that call or return it immediately because of the passion I have for football and our country.

"It is the responsibility that I think we all have. We will see what happens. Right now, I am enjoying this project fully. But I hope to one day be involved in the national team in whatever capacity."

When pressed on what needs to be done to maximise the potential of the USMNT, Marsch had clear ideas: "I think, first, the training environments for young players needs to continue to get better. Frankly, that comes from coaching.

"In the past five years, we have really upped our coaching education. If I am being totally honest, then the level of coaching in our country for the last 20 years has not been good enough. That’s at five-year-old level, 10-year-old level and professional level.

"So, we need to continue to grow the standard. Sometimes that has meant importing expertise but I think we can still grow the right talents from a coaching perspective in our country.

"Then, the proper playing environments that we create at younger ages means that we can continue to competitively produce better players that are 14, 15 and 16-year-olds.

"We are very impatient in the U.S. and as the game becomes more global, our lack of patience is exposed more and more but we have made great progress.