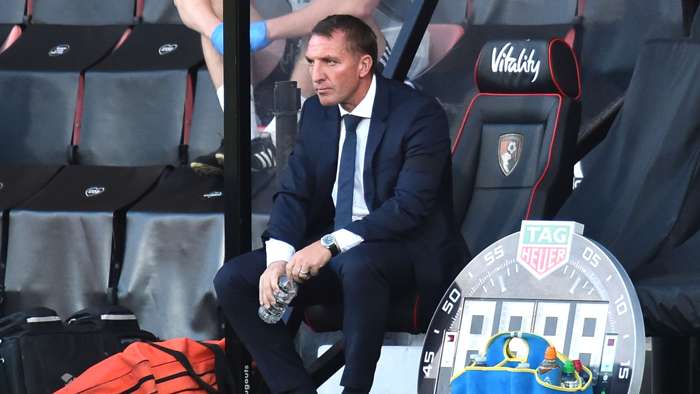 A disappointed Brendan Rodgers believes Leicester City will 'finish where they deserve' after their top four hopes took a hit in a 4-1 thrashing at Bournemouth on Sunday.

Rodgers was surprised at the heavy loss suffered by his players at the Vitality Stadium and implored them to focus on their form instead of worrying about the dream of finishing in the top four.

The former Liverpool boss also had no complaints about the red card suffered by defender Caglar Soyuncu, who kicked out petulantly at Callum Wilson.

"I didn't see that coming but we are not good enough to get too comfortable," the Leicester manager said. "We were in control of the game, Bournemouth changed their shape and you expect a 10-minute spell when you are up against it.

"We let them into the game with a penalty and I was very disappointed with how we played from there. It's not like us, we are a team that is strong mentally and we don't concede many goals.

"It's a red card. We should defend the goal better but Soyuncu he's lashed out. You offer the referee the opportunity to send you off. It's massive to lose him for the next three games.

"I've always said it's a dream for us to finish in the top four but we have to worry about playing well. At the moment, since we came back we have been playing for 45 minutes in games and that's not enough. We will finish where we deserve to.

"If you think about what is at stake you have lost your focus."

Leicester had looked on course for only a second league win since last month's resumption after Jamie Vardy's 23rd-minute opener, but they fell apart in the second half.

A Kasper Schmeichel error just past the hour led to Wilfred Ndidi conceding a penalty, which Junior Stanislas converted, and 101 seconds later Dominic Solanke ended a 39-match wait for his first top-flight goal for the club.

Soyuncu then received his marching orders in the 67th minute for the altercation with Wilson, straight afterthe Foxes had gone from leading the match to trailingin a two-minute period.

A Jonny Evans own goal in the 83rd minute effectively secured the win, before Solanke's second rounded it off – the victory moving Bournemouth back to within three points of safety ahead of their final three games,.

Leicester have a tough finish to their league campaign withSheffield United (home), Tottenham (away) and Manchester United (home) to come.