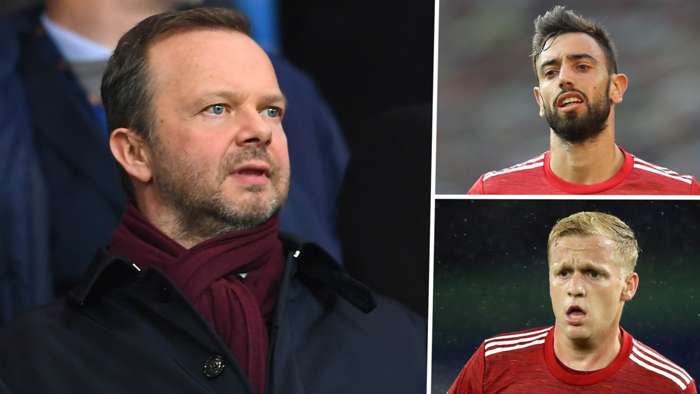 Solskjaer was backed to the tune of over £150m($196m)during his first full campaign in charge, with the likes of Harry Maguire, Aaron Wan-Bissaka and Bruno Fernandes proving to be valuable additions to the Norwegian's ranks.

A third-place Premier League finish was seen as a step in the right direction for the Red Devils, althoughthe general consensus was that more reinforcements would be needed to challenge the elite, with Borussia Dortmund's Jadon Sancho initially identified as their next priority target.

Donny van de Beek arrived at Old Trafford from Ajax for £41million ($54m)on September 2 but supporters were made to wait until the October 5 deadline before seeing any further new faces.

United ultimately failed to land Sancho as Dortmund held firm on their €120 million (£109m/$142m) valuation of the winger, and last-minute deals for Alex Telles, Edinson Cavani and Facundo Pellistri did little to satisfy a frustrated fanbase who hadseen Liverpool, Manchester City and Chelsea strengthen significantly.

A slow start to the new Premier League season has increased the mood of negativity surrounding the Theatre of Dreams, but Woodward has insistedthat progress is being made on and off the pitch while reiterating his faith in Solskjaer.

The executive vice-chairman delivered a message to supporters after the release of United's end-of-yearfinancial results, having seen the club's revenue shrink by 20 per cent amid the coronavirus crisis.

"On the field, we will never be satisfied atManchester Unitedunless we are winning trophies," said Woodward.

"But our third-place finish in the Premier League and strong cup runs last season showed that, while there is more hard work ahead and the path is not always smooth, we are making progress.

"We have a clear strategy under Ole Gunnar Solskjaer to build a successful, committed team, with a core of home-grown talent blended with high-quality recruits, that plays fast flowing, attacking football.

"To that end, we are pleased with our recent additions to the first team squad of Donny van de Beek and Alex Telles, two players we had been tracking as part of our recruitment process for a long period, and Edinson Cavani, a top striker who adds a new option to our forward line.

"We also welcome Facundo Pellistri and Amad Diallo, who will join in January, two exciting young prospects who have also been scouted extensively.

"Added to the arrival of Bruno Fernandes earlier this year, these recruits underscore our continued commitment to strengthening the squad and take our net investment in new players since summer 2019 to over €200m – more, I believe, than any other major European club over that time period."

Woodward added on United's net debt increase over the past year:"We are looking back today on what has been one of the most extraordinary and challenging seasons in recent history.

"There are still big challenges and uncertainties ahead as the coronavirus pandemic continues to disrupt our way of life across the globe.

"This disruption is clear to see in the financial results that we are announcing today and we expect the impact to remain visible for quite some time to come.