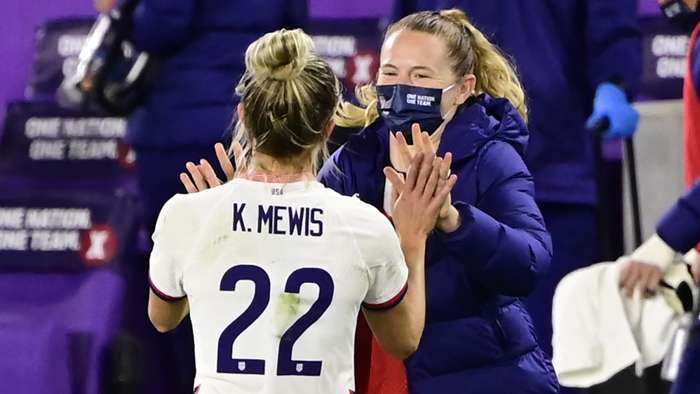 Sam Mewis had already scored a hat-trick against Colombia before her older sister Kristie was subbed into Monday night’s friendly with 25 minutes remaining.

With five minutes to play, the elder Mewis scored a clinical volley off a cross from Carli Lloyd to make it 4-0 following the treble Sam had scored earlier.

After Kristie scored the final goal in November’s 2-0 win over the Netherlands, the last five USWNT goals have now been scored by a Mewis.

They have taken different paths to this point. Sam has established herself as a star over the last several years, while Kristie is just coming back into the picture after a period of subpar play and a serious knee injury.

“I’m just so proud of Kristie,” Sam said after the Colombia match. “I think it’s so cool to watch her succeed here and have her here.

For Sam, having Kristie back with the team is a boost on and off the pitch.

“Being on this team and being a professional soccer player, there's so few people that understand what that's like and understand the ups and downs of that,” the Manchester City midfielder said.

“There arejust so few people that really get it and so to have my sister doing this alongside me, someone who really understands what we go through, what we do, how bad we want it, what we're willing to give up to get it,I think it brings us so much closer.”

After winning the 2020 U.S. Soccer Female Player of the Year, Mewis has gone on to make an impressive start to life in the WSL with Man City. Though Mewis is now 28, her national team coach said he still thinks she has another level to reach after witnessing her first career USWNT hat-trick.

“I don't think that's her best,” Vlatko Andonovski said after Monday’s game. “I really believe that Sam has still a lot to grow which is exciting.

As is her nature, though, Sam tried to downplay another accomplishment on her growing CV.

"I think by some stroke of luck I happened to be on the penalty kick list tonight," she said of her third goal.

"I can't take all the credit at all. I think they really truly were all good team goals and I'm just proud to be a part of that."

Ironically, Sam’s continuing status as one of the first names on Andonovski’s team sheet will make it tougher for her older sister – also a central midfielder – to earn consistent minutes with the USWNT.

Kristie isn’t too concerned about competing with Sam, though. After all, that just comes with the territory of being siblings a year and a half apart.

“Sam and I have been competing our entire lives, so it’s honestly really nothing different,” the Houston Dash midfielder said prior to the Colombia game.

“We’ve literally been doing this since we could walk, on and off the field. So, I think the best thing about it is we just push each other to make each other better.