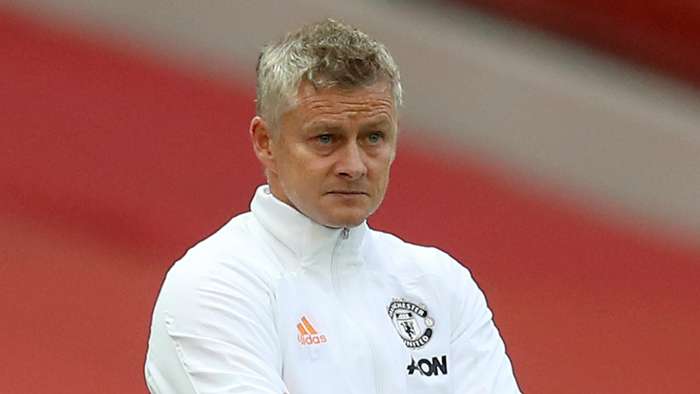 Ole Gunnar Solskjaer admits resurgent Manchester United must "step it up even more" next season if they hope to compete with Liverpool and Manchester City.

Although finishing third would be a positive outcome given it appeared a distant prospect earlier this year, United's standards have generally been set much higher during the Premier League era.

Given it isarch-rivals Liverpool and neighbours Citywho have been sweeping all before them, any United celebrations at the end of this campaign are bound to be on the quiet side.

A 13-match unbeaten run in the top flight has taken United to the precipice of a Champions League return next season, but Solskjaer sounded a wary note. His side sit a hefty 33 points behind Liverpool after 37 games and 15 adrift of City.

"We've not ended up anywhere yet, so it's one more game to show we've become a better team," he said. "If we get a result againstLeicester, Ithink people would say this journey has been a good one - but then again, this is not the end of the journey. If you get there, it's not like 'breathe and relax'.It's 'go again, go to the next one'.

"We know that there are two teams too far ahead of us, so we have to step it up even more."

United's recent league form has suggested they could be plausible challengers in 2020-21, but Solskjaer's former Red Devils team-mateGary Neville has claimedthey will need to recruit well, signing three or four top players, just to be in the hunt for a top-three finish next term.

Asked about Neville's comments, Solskjaer told a news conference: "There's no point now discussing what we need for next season. We need to just focus on the game against Leicester."

As for whether third place was good enough for a club of United's stature, Solskjaer was non-committal, indicating he would rather enter that debate after his team wrap up their Premier League and Europa League campaigns.

"Let's get this game out the way and get the third position and continue the growth and the journey this team's on," he said.