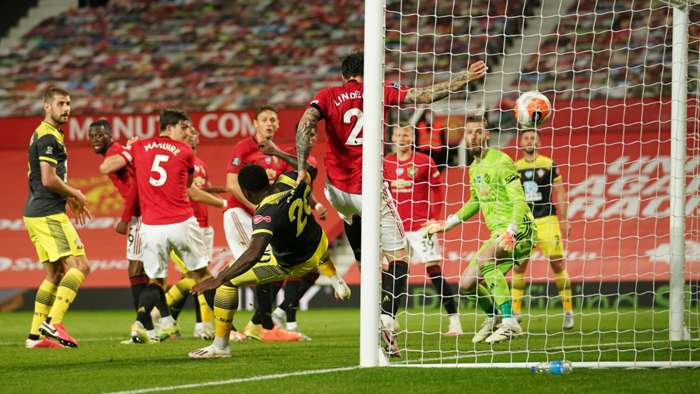 Manchester United have improved at defending set pieces despite conceding a late equaliser from a corner against Southampton, according to captain Harry Maguire.

After Southampton went ahead through Stuart Armstrong in the 12th minute- following a Paul Pogba mistake in midfield - United quickly worked their way back into the game and were ahead mid-way through the half through clinical strikes from Marcus Rashford and Anthony Martial.

But just as the Red Devils were set to leapfrog Leicester and Chelsea with their sixth consecutive win in all competitions, Obafemi got in front of Victor Lindelof to poke in Roman Bednarek's flick from the corner.

Maguire believes United have got better at stopping teams threatening from set pieces, but said the situation in allowing Obafemi the space to score was inexcusable.

"We have improved on defending set plays," Maguire told Sky Sports. "We had a terrible record at the start of the season but have been really good on them.

"They can't get in when we have four men around the goal so we'll have to look at it.

"We are disappointed at the moment but we dust ourselves down tomorrow."

With Chelsea and Leicester both losing their recent matches, United missed the opportunity to go clear in third in the Champions League race and instead remain in fifth position - behind the fourth-placed Foxes on goal difference.

Despite having not lost a match since January, Maguire insisted the United players weren't suffering from complacency and urged the team to focus ahead of their final three league games against Crystal Palace, West Ham and Leicester.

"There is definitely no complacency - great group of lads," Maguire told MOTD. "We knew it would be a tough game, felt we did enough to win the game but we didn't.

"There are big games between now and the end of the season and hopefully we can get to where we want to get to.

"We want to be playing for titles. I am sure the boys will dust themselves down and we have a big game coming up next."

United also have an FA Cup semi-final against Chelsea at Wembley on July 19 and they still remain in the Europa League round-of-16, which they will recommence against LASK next month.