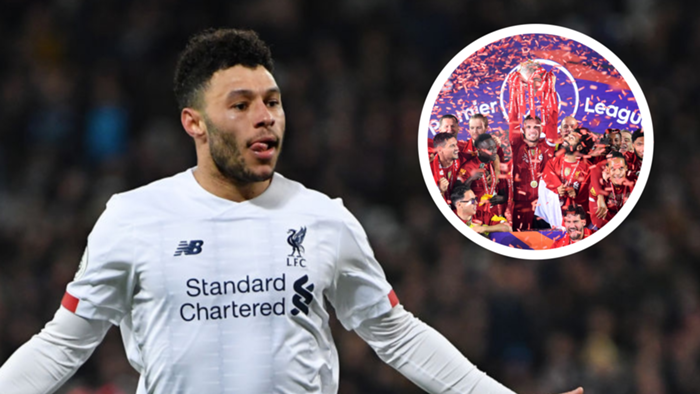 It’s become almost a daily ritual in the physio room at Melwood.

The TV will be on – Sky Sports or LFCTV, usually – and at some point there will be a mention of Liverpool’s Premier League title win, a look back to that most memorable of campaigns, a picture or a clip from those iconic celebrations on the Kop.

And then somebody will turn it off.

Why, one wonders? They have, after all, waited a long time to call themselves champions. For Jurgen Klopp and his players, this was a career-defining moment, career-defining images and memories.

“It was amazing, but it’s done now,” says Oxlade-Chamberlain, who is speaking exclusively toGoalas part of Coca-Cola’s ‘Make Your Home the Home End’ campaign.

“We can look back on it later, but we can’t get caught up in it now. Why did we achieve what we did? Because we didn’t lose our focus. It was always about ‘what’s next?’ and that’s how it is now.

“As a team, it doesn’tfeellike we did it, if you get me? We know we did it, we know we are in the history books and we have our medals to remind us, but being in and around the building, no-one is talking about it, no-one is giving off the impression that we are champions, and that’s how it should be.”

Much has been said and written about the mentality of this Liverpool team. Klopp calls them ‘monsters’ and says he has never worked with a hungrier, more relentless group of players.

It is easier, of course, to say such things when a side is winning, but the evidence suggests the manager has a point. The Reds began their new league campaign on Saturday, for example, by digging out a narrow-but-vital 4-3 victory over newly-promoted Leeds United at Anfield – a good result on the back of a mixed performance.

That, Oxlade-Chamberlain says, was one of the themes of last season/ Liverpool won 32 of their 38 league matches in 2019-20, and 14 of them were by a one-goal margin. They didn’t always play fantastically, but they pretty much always held their nerve when it mattered.

“I felt that for the most part of last season,” Oxlade-Chamberlain says. “When I look back on the season, as amazing as it was, there were a lot of times when I wasn’t happy with how I’d played, personally.

“That’s me being honest with myself, which I think you have to be. I know I can do better, and I don’t think I was the only one who thought that.

“But if you look at the season before, when we finished second, we had a lot more games where we won 3-0 or 4-0. The difference last season, and it was obvious, was that in the games we didn’t play well in, we were still able to win 1-0 or 2-1. We’d find a way.

“We were drawing those games before. We’d win 4-0 and look unbelievable, then we’d not quite be on it and we’d draw 1-1, and drop points. That didn’t happen this time.”

So how, then, do Liverpool improve further? How do they improve on 97 and 99-point league campaigns, on Champions League success, Club World Cup glory and a Premier League title? What is left for them to achieve?

Improvement is often driven by critics, and there are no greater critics of this Reds side than the players themselves, as Oxlade-Chamberlain explains.

“We are always honest with ourselves,” he says.“There were a lot of games last season where we’d come off and say ‘that wasn’t good enough’ even if we’d won.

“Salzburg is one. Remember that one at home in the Champions League?”

We do remember. Liverpool led 3-0 in the first half of that game, but conceded three times in 21 minutes either side of the interval and needed Mohamed Salah to bail them out for a narrow victory.

“If you’d been in the dressing room after that game, you’d have thought we’d lost,” Oxlade-Chamberlain reveals.

“Everyone’s heads were down because of how the game had gone. The manager kind of had to come in and lift us. He said ‘I know that wasn’t great but you’ve just won a Champions League game 4-3!’

“He knew we weren’t happy, but that’s the base that’s kept us going. We are never satisfied, even when we are winning. We know we can do things better.

“Listen, it’s never perfect and it never will be, but you still have to try to be as individuals and as a team. You have to want more.”

For Oxlade-Chamberlainpersonally, the first challenge is to get back playing. The England midfielder is currently recovering from a knee injury picked up in pre-season. He is expected to be sidelined for at least a few more weeks.

By that time, he hopes Liverpool will have reaffirmed their status as the team to beat. He knows that the challenges will come – from Manchester City, from free-spending Chelsea and from the rejuvenated Manchester United and Arsenal – and that all eyes will be on the champions. After watching them rise, the world now wants to see them fall.

Bring on the challenge, he says.

“For any top team, the challenge is obvious,” Oxlade-Chamberlain says. “It’s one thing to win something once, and we shouldn’t downplay that, but to do it consistently, season on season, is what makes a team special.

“Look at the greatest teams in history, the Liverpool teams of old who have made this club what it is, they did it every year, not just once. That’s our main goal.

“I look back to the season before, when we missed out by a point. People looked at it and thought ‘what more can you do?’ Ninety-seven points and you still don’t win it? How do you improve? But we just got our heads down, we worked even harder and we went the distance again.

“That’s hard to do. You can go two ways; you can either question yourself and think ‘can we really do that again?’ or you can get your head down and go again.”

No prizes for guessing which route Liverpool will be taking this season. The mentality monsters are up and running once more.