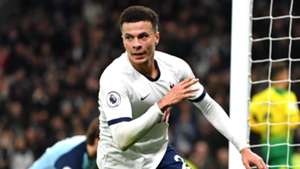 Dele Alli has called on Tottenham to 'step up' as their injury crisis in attack worsened ahead of their Champions League tie against RB Leipzig.

Spurs revealed on Monday that Dutch forward Steven Bergwijn had suffered a "significant" sprain to his left knee during Saturday's 1-1 draw at Burnley - with Jose Mourinho admitting the player is unlikely to feature again this season.

The injury further limits Tottenham's attacking options, with Harry Kane and Son Heung-min already out until the closing weeks of the campaign.

Left-back Ben Davies will not be available against Leipzig either, with Mourinho's men trailling 1-0 after the first leg at the Tottenham Hotspur Stadium.

Alli, who has been deployed as an emergency striker in recent matches, lamented the injury to Bergwijn, but hoped Spurs could put the news aside to to focus on the rest of their season.

"I think obviously firstly it's difficult to see Steve get injured, a new guy and a top guy," the England international said.

"I've shown that I like scoring goals, although it's probably not my most natural position. But we can't just get our violins out. We need to step up."

Reflecting on Spurs' latest injury misfortune at his pre-match media conference, the Portuguese tactician said: "I can believe it.

"Ben [Davies will be] one week, two weeks. With Steven, I don't expect him to play again this season.

"We're used to it. I'd say we were psychologically more down with the other injuries, because when you've got four or five injuries, what's six or seven?

"You ask me how can you score two goals without Kane, Son or Bergwijn, but there are many ways to score goals.

"A Leipzig player could even do what Antonio Rudiger did and score for us (an own goal in Chelsea's 2-1 win)."

Defeat would end Tottenham's hopes of silverware for another season, having exited the FA Cup last week, but Mourinho is confident he will deliver success during his tenure.

"I believe that Tottenham is not going to be my only club without silverware," he said. "I won at every club and I believe I'm going to do it at Tottenham."