'We can't give up chances like this!' - Ramos furious at Madrid's Betis slip 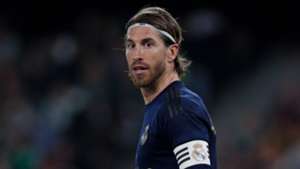 Sergio Ramos insists Real Madrid will not "drive ourselves mad" after following up their Clasico win with defeat at Real Betis, but he acknowledged Sunday's match in Seville represented a huge missed opportunity.

Madrid took pole position in the Liga title race with victory over rivals Barcelona last week, only to fall back to second with a 2-1 loss at Betis after the Blaugrana's triumph the previous day.

Zinedine Zidane's side struggled to break down Betis and were fortunate to be level when Sidnei, the scorer of a brilliant opener, conceded a penalty that Karim Benzema dispatched.

However, Cristian Tello- formerly of Barca - netted an 82nd-minute winner, meaning Madrid have won just one of their past five matches in all competitions.

Ramos recognises there is a long way to go in the season, with 11 matches remaining, but he is keen to see his side rally to ensure there are no further setbacks.

The captain, who acknowledged Madrid "didn't feel comfortable at the back", with Betis wasteful prior to their winner, reflected: "This is football.

"I thought we deserved the draw, but we have to now be self-critical. There's nothing good to take from this game, but there's a lot of the season remaining.

"It's a blow. We wanted the leadership back but we weren't able to claim it.

"We're not going to drive ourselves mad. Of course, we won last week against Barca. After dropping three more points, we know there are still a lot of points still to play for with 11 games remaining.

"But we know if we want to be champions, we can't give up chances like this. We know this is a difficult place to come and Betis are a difficult team to play, but we can't drop points.

"We have to put this behind us and come back even stronger.

"At the end of the day, the most important thing is the spirit of the group. We have to gain confidence and that's the objective of the week to come."