'We can play free football again!' - Klopp believes loss could lift weight off for Liverpool 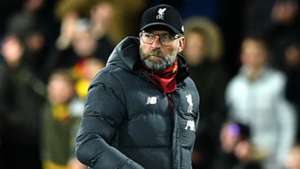 Jurgen Klopp looked on the bright side of Liverpool's first defeat in 44 Premier League matches and is hopeful "free football" will return now they no longer have the pressure associated with potentially going unbeaten for a full season.

Liverpool went into Saturday's match at Vicarage Road having won 18 successive league games, one shy of a new record, while they were 44 matches unbeaten.

But Watford produced a fine performance to stun the Reds - Ismaila Sarr leading the way with two goals and an assist for Troy Deeney's clincher 17 minutes from time.

The defeat is unlikely to have any major impact on Liverpool's title charge, as they remain 22 points clear, but it means they will not be able to record the second unbeaten campaign in Premier League history.

Nevertheless, Klopp feels such a scenario could actually prove beneficial to Liverpool from the perspective of pressure.

"We were going to lose a game at some time, and we didn't wait for it but it was clear it would happen," Klopp told reporters.

"Tonight it happened and I see it rather positive that we got close to these records.

"I am not celebrating a 44-game run. Some people have said other numbers, and I'm not sure which is the right one because I don't care who is right. I don't know, I'm not interested.

"Other teams did the same but couldn't get the same amount of points because it's so difficult. It's not easy to explain why tonight it didn't happen for us, but it shouldn't be the biggest sensation in world football.

Watford boss Nigel Pearson was understandably thrilled the Hornets could be the side to end Liverpool's run, but he is eager to ensure it is not for nothing, as they remain mired in a fight against relegation.

"To beat the best club side in the world at the moment is testament to how we played," he said. "So, it's very satisfying, but it's just one game.

"We've got 10 games left and they're all going to be very important. We've got to try to emulate what we've done today in terms of performance.

"In the context of our season, it's a really important three points. We knew we would have to be at our best today, and I think we were."

Watford moved out of the bottom three on goal difference with the victory.