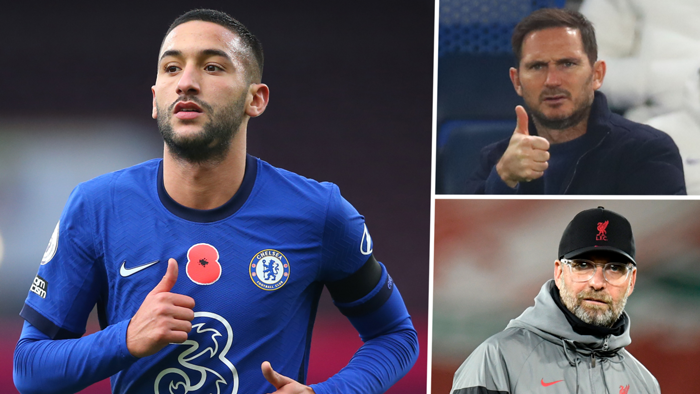 Edouard Mendy embraced Reece James as they walkedoff the field, while Ben Chilwell had Thiago Silva in a playful headlock following Chelsea's 4-1 win over Sheffield United, emphasising the prevalent feeling currently around the club.

Chelsea are now just one point behind the table-topping duo of Liverpool and Southampton, a situation which puts the Blues firmly in the title conversation.

In a title race that looks like it's going to have plenty of outsiders, Chelsea look now to be the most threatening to Liverpool and Manchester City, who face each other on Sunday night.

The depth of the squad and the ease in which the big signings have settled have meant a rapid improvement in form.

Lampard has been cautious about talking of the title in order to minimise pressure on his side, but the noise from outside increasingly puts Chelsea in the picture.

"We are third. Now we are seeing some of the work. Some of the work today was really encouraging for me to see those signs. I am the first to keep my feet on the ground," Lampard told Sky Sportsafter downing the Blades at Stamford Bridge.

"Every game is challenging. The players are the ones who deliver and deserve that first credit. They were amazing, all of them today. The balance of the team was good and it's nice to see. We must continue. I really enjoyed watching it but I know how football is."

United manager Chris Wilder, having seen his side playboth Liverpool and Man City already this season, puts Lampard's side in the race.

"To me, Man City, Liverpool and Chelsea are the top three sides in the country. Just look at Jorginho and Giroud coming off the bench," he said.

David McGoldrick's strike was the first breach ofMendy's goal in 459 minutes of action but that backline looked strong for much of the 90 minutes on Saturday. It is four wins in a row - and eight games undefeated - for the side who were previously weak in defence.

Along with a settled rearguard, Lampard has got the best out ofhis 4-3-3 formation which has perfectly balanced his signings. Many of his new players, like Thiago Silva, are making a huge impact.

The 36-year-old's presence has lifted both Kurt Zouma and James to a new level, and goalkeeper Mendyis a huge improvement on out-of-form Kepa Arrizabalaga.

Many of Chelsea's most dangerous chances againstthe bottom of the table side were conjured byZiyech's wand of a left-foot, which was too much to handle.

Ziyech created more chances than any other player in a single league match this season -six -withtwo leading directly to goals on a day when Chelsea created 20 in total.

He played in Mateo Kovacic, who pulled the ball back for Tammy Abraham's opening goal. He then assisted Ben Chilwell's far-post tap-in with his trademark crossing ability and again for Thiago Silva. Timo Werner rounded off the scoring with his eighth of the season in all competitions.

Ziyech's emergence epitomises the squad strengthat Stamford Bridge. The puzzle presented by aninjury to Christian Pulisic was easily solvedby his presence, while Kai Havertz's positive Covid-19 test rules him out for the time being.

Abraham has also emerged up frontto breathe new life into the team.Arun of good performances has seenhim claim four goals and five assists despite limited minutes this season. Callum Hudson-Odoi and Giroud are still struggling for game time as Chelsea's £220 million ($275m) round of spending has elevated the club to be rapidly ready for a title charge.

The return on investment is being proven through the current league position, with an extra four points being earned fromthe same fixtures compared to last season. The truncated schedule following the coronavirus pandemic has meant less time to recover between matches, and an increased risk of players missing games through injury or illness. But the squad depth is now sufficient to withstand those rigours.

The rapidschedule has also led to strange results, and with Man City currently languishing in the bottom half, the gaze may increasingly turn to the Blues to provide Liverpool with a title race.