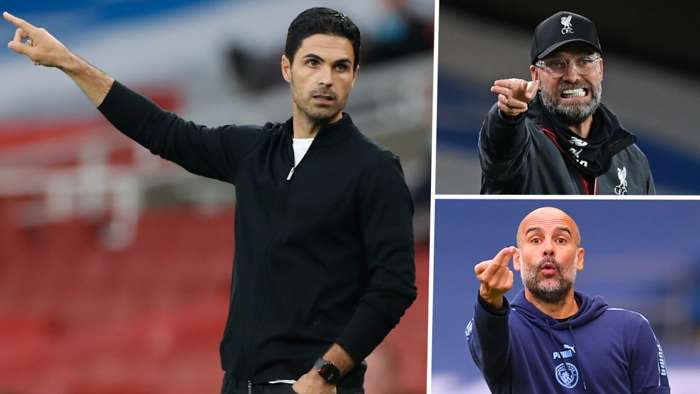 The team selection might be different, but if Arsenal want a blueprint of how to beat Manchester City in the FA Cup semi-final on Saturday, then this was it.

And they did exactly that and more, as they claimed a remarkable 2-1 win at the Emirates which kept their faint hopes of landing a Europa League spot alive, ending Liverpool’s dreams of setting a new record Premier League points tally in the process.

This was Arsenal’s first win over Liverpool since April 2015 and their first since Jurgen Klopp arrived on Merseyside. In their previous eight league games against the Reds, they had conceded 26 goals, shipping three or more in seven of them.

So, Arteta will have known exactly what to expect when he sent his team out to take on the newly crowned champions of England and he clearly did it with one eye firm placed on Saturday’s semi-final, with Pierre-Emerick Aubameyang, Dani Ceballos, Hector Bellerin and Shkodran Mustafi all left on the bench.

However, those who came in stood firm against wave upon wave of Liverpool attacks and ensured Arsenal bounced back from last Sunday’s north London derby defeat at Spurs in the best way possible.

And if the Gunners are to book their spot in the FA Cup final, then they are going to have to do it all over again against City.

This isn’t an Arsenal team that can try to take the game to Pep Guardiola's side; this is a team that is going to have do a backs-to-the-wall job at Wembley. Just like with Liverpool, the difference in quality between the two sides is vast.

“At the moment, you can see in many areas the gap between the two teams, what we have to achieve and the areas where we have to improve” Arteta admitted following the surprise win over the Reds.

"Before, it wasn't like this. I'm very proud of that. The rest will take some time but at least we've got that now and my message to the players is with that we can create something."

Other than the victory over Liverpool itself, the big positive for Arsenal is they will head into Saturday’s semi-final with the confidence that they can beat a team of City’s calibre and that they can, if things go their way, win a game when they rarely see the ball.

Liverpool had just shy of 70 per cent possession at the Emirates and they ended the game having had 24 shots, with 17 of them coming in the second half.

Arsenal, meanwhile, had just three, with their final effort on goal coming in stoppage time, when Joe Willock sliced a great opportunity wide after a rare counterattack.

Prior to that, the two other efforts Arteta’s side had resulted in goals, with Alexandre Lacazette and Reiss Nelson cancelling out Sadio Mane’s opener.

For the first in a long time, Arsenal were clinical. On both occasions they pressured Liverpool into mistakes and Lacazette and Nelson took full advantage.

"It's our way," a delighted Arteta said. "You can see how the players go into every duel, into every action, how intense they are, everybody's willing to do that and if you press the pass, you'll force mistakes from the opponent.

"To beat this team, you know how many good things you have to have. You have to have moments in the game when you just take your chances; that’s what we did. You have to defend in many moments the way we did and you need a bit of luck – we had all of that.

"In terms of energy and happiness in the dressing room, to put a defeat against Spurs away before thesemi-final, obviously, it’s a good medicine."

Arsenal have lost their last seven games against Manchester City, conceding 20 goals and scoring just two, which merely underlines the size of the task ahead of them.

But they know if they want to be playing European football next season, finding a way to get past City will be key.

The victory over Liverpool may have kept their hopes of securing a Europa League spot via the Premier League alive, but it’s still very unlikely – given they sit two points behind seventh-placed Spurs with just two games remaining.

Winning the FA Cup remains the best route back into Europe for Arteta’s side and they now have the blueprint for achieving that success.

It may not be pretty, but as the champions found out, itcan be effective.