‘Wan-Bissaka didn’t give Sterling a kick’ – Man Utd were in ‘complete control’ of derby, says Hargreaves 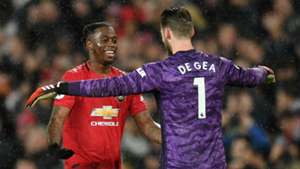 Manchester United were always in "complete control" of a derby date with arch-rivals City, says Owen Hargreaves, with the likes of Aaron Wan-Bissaka, Bruno Fernandes and Anthony Martial starring for the rejuvenated Red Devils.

Ole Gunnar Solskjaer saw his side put in a thoroughly professional display when downing the Blues 2-0 at Old Trafford.

United were prepared to surrender plenty of possession and back their ability to make the most of opportunities in the final third when they materialised.

That game plan was played out to perfection as Martial and Scott McTominay found the target, while an eighth clean sheet in 10 outings was secured by a watertight defensive unit.

Hargreaves was among those impressed by the performance of a United team that have become upwardly mobile once more, with belief surging through the squad and lifting the spirits of those in the stands.

The former Red Devils midfielder told Premier League Productions: "I just felt that, as much as City dominated possession, United were in complete control of the game.

"I thought they had more chances and looked the most dangerous team.

"Individually, Wan-Bissaka against Raheem Sterling, he didn't get a kick. Luke Shaw was outstanding again in that position, Dan James ran the channels, Anthony Martial was clinical, the midfield three were very good. Bruno Fernandes again was decisive.

"I just thought there were so many top performances from Manchester United. That's what Ole spoke about, the attitude. That's what Sir Alex [Ferguson] gave the players, he demanded that attitude.

"That's why the fans were so up for it, they felt that from the players. That's why that second goal came.

"Even though they had the lead, they still found a way when they got possession - which they didn't have much of - to pose a threat.

"Overall from Manchester United it was a huge performance. Champions League football is what this club is all about and it looks like they have every chance of being there next season."

United remain fifth in the Premier League table but are only three points behind Chelsea and five adrift of Leicester.

They are also through to the last 16 of the Europa League, so still have two routes back to Champions League competition open to them.