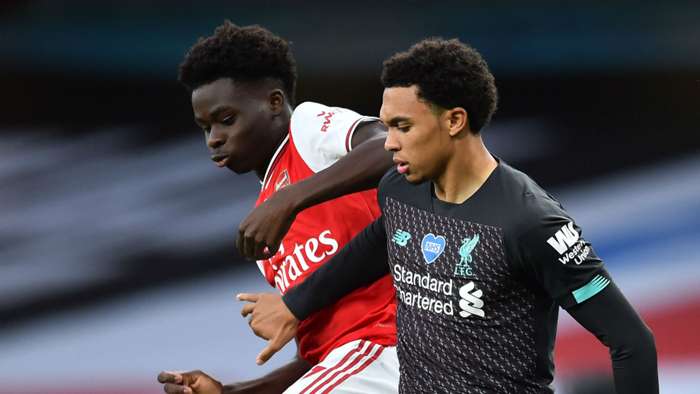 Pierre-Emerick Aubameyang has aired his frustration at the lack of input from VAR during Arsenal’s clash with Liverpool, with Bukayo Saka caught by a shin-high tackle from Trent Alexander-Arnold.

It was clear at the time of the incident that he had been on the receiving end of a late challenge. Both men were looking to play the ball, but only one got a boot to it as the other came in over the top.

Saka was left in a crumpled heap on the turf, with Alexander-Arnold seeing a yellow card flashed in his direction.

That was considered to be the end of the matter, with those in charge of technological assistance opting against calling match referee Paul Tierney to a pitch-side monitor.

Slow motion replays showed that Alexander-Arnold had, despite not being at full speed and force, connected high up on Saka’s leg.

A similar incident during Arsenal’s Premier League meeting with Leicester on July 7 saw Eddie Nketiah dismissed shortly after his introduction off the bench for a high challenge on Justin James. He had also initially been shown a yellow card, only to see his punishment increased on review.

Aubameyang is baffled as to why the same approach was not taken with Alexander-Arnold, with the Gunners captain taking to Twitter to vent his anger. He posted in response to an image of the incident in question: “WTF didn’t even get the VAR on this one.”

Arsenal fans had been quick to express their frustration at the time, with many asking further questions of the role technology has played in Premier League football this season.

Gunners legend Ian Wright was as perplexed as any, with the former frontman, speaking as a pundit on Match of the Day, saying: “There’ll probably be some long-winded reason why that’s not a sending off but Eddie Nketiah’s is. Something like that.”

Mikel Arteta could have been forgiven for joining the debate, having been the receiving end of two debatable calls in the space of three matches, but he was happy to reflect on a 2-1 win over the newly-crowned English champions.

The Spaniard had said in the wake of Nketiah’s dismissal: “In the last year I have never seen a referee check any images. I do not understand the rules, but I can do nothing now.”

Arteta is trying to keep focus locked on a bid for European qualification, in Premier League and FA Cup competition, while also waiting on a decision from Aubameyang regarding a possible extension to hiscontract, whichis only due to run until the summer of 2021.