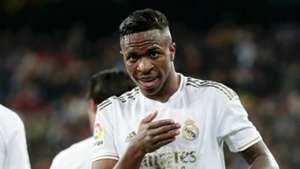 Vinicius Junior described Sunday's El Clasico clash with Barcelona as his "best night" as a Real Madrid player after leading the La Liga giants to a 2-0 victory at the Santiago Bernabeu.

Vinicius broke the deadlock in the 71st minute, the Brazil forward played in by Toni Kroos before sending a deflected shot past Barca goalkeeper Marc-Andre ter Stegen.

At the age of 19 years and 233 days, Vinicius became the youngest player to score in the Clasico in the 21st century, breaking the record previously held by Lionel Messi.

And Vinicius, tallying his 57th appearance for the Spanish giants in all competitions, admitted he could not be happier to make his mark in the famous fixture.

"It's my best night since I arrived at Real Madrid, for sure," he told Movistar. "I work hard for the team and always hope my time comes.

"Toni gave me a good pass that we had practised in training and today I was able to score from it. I went to shoot and the ball went in off [Gerard] Pique.

"Now we have to continue like this, for both us and the fans, who are always there supporting us. I am in the best team in the world and want the fans to be happy."

Mariano Diaz also made some history by scoring 50 seconds after coming off the bench to seal the deserved home win - the fastest Clasico goal by a substitute this century.

Barcelona were frustrated by a number of impressive Thibaut Courtois saves and had a Martin Braithwaite shot blocked on the line when the game was still goalless.

And after relinquishing control of top spot with their first defeat to Madrid in eight league games, midfielder Sergio Busquets conceded his side did not do enough with the ball.

"We lost control because we lost possession," he said. "We don't know how to bring the ball out from the back when they press us man to man.

"Sometimes you're not sure with a pass and you run a risk, although I think we have the players to carry it out.

"We all like to have the ball and I think we have the players for it. Every team suffers without the ball. We're not the most defensive nor the most physical of teams."

He added: "It was the opportunity to gain some distance and it wasn't to be. We had a very good first half, but it changed in the second half.

"We struggled to play out from the back and they took their chance to come forward. They scored the opener in a disappointing moment for us."