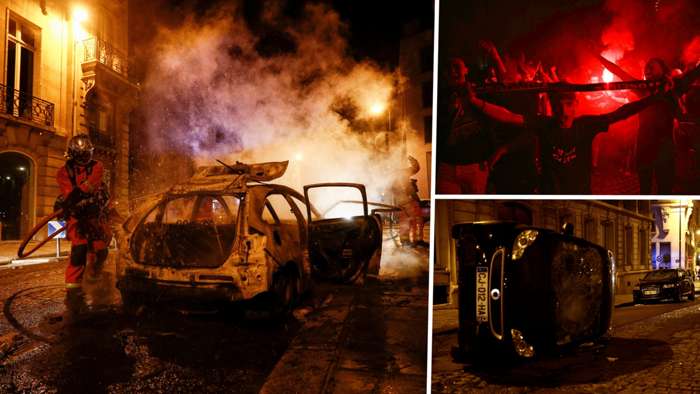 Pictures of burnedout and trashed vehicles near Paris' famous Champs-Elysees haveemerged in the aftermath of PSG's defeat to Bayern Munich in the Champions League final on Sunday.

Thousands of PSG fans had gathered near the landmark to watch the final and were left heartbroken as their team went down 1-0 courtesy of Kingsley Coman's second-half header.

Images uploaded by Getty Images photographers show plenty of unrest occurring after the match, with pictures of firefighters extinguishing a smoking vehicle, while another car is also pictured laying on its side.

There is also stills of perpetrators throwing flares in the Champs-Elysees, while rubbish bins can also be seen burning as PSG fans marched down the famous promenade in huge numbers.

France is still currently gripped by the coronavirus pandemic with the gathering of fans still occurring at both the Champs-Elysees and PSG's home ground Parc des Princesdespite Paris being declared a Covid-19 red zone.

PSG weren't without their chances in the defeat to Bayern, with Kylian Mbappe missing a gilt-edged chance after being teed up by Ander Herrera, while Neymar had a goal-bound drive superbly saved by Manuel Neuer.

It was former PSG academy product Coman who broke the deadlock in the 59th minute, heading homeJoshua Kimmich's cross at the back post.

PSG coach Thomas Tuchel was disappointed by the outcome but proud of his players for the gritthat they showed in the match.

"It was a real fight! I don't know if we can see it on TV," Tuchel said to RMC Sport. "We gave our all, we left our hearts on the field.

"We can't control the outcome. It's a goal that makes the difference between two super strong teams. I'm very proud of the way we played, of our mentality. That's all a coach can ask of his players.

"I'm disappointed, but not too disappointed. It's a close score. I'm convinced that if we score first we win the game 1-0."