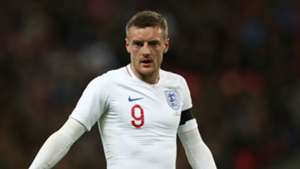 Jamie Vardy is not ruling out the prospect of a return to the England squad for Euro 2020 following the injuries suffered by Harry Kane and Marcus Rashford.

With both Kane and Rashford battling to be fit for the European Championship in the summer, there have been calls for Vardy to return, and it is a scenario he is not dismissing completely.

"Who knows? Gareth and I were both agreed that the door would still be open for whatever reason and then we would sit down and have a talk about it [if needed]," Vardy told Sky Sports.

"We've not had the chat or anything yet and nothing has been spoken about. The lads (Kane and Rashford) are out injured, but they're looking to be back in time. So only time will tell.

"I'm not going to lie, I've had a few extra days off in the international breaks so I've been able to switch off completely from football and it is always beneficial sometimes.

"Knowing that when you get back it's constant again, it's 100 per cent football every day so it's one of those things that has benefited me."

Vardy is still recovering from a calf injury of his own, which has seen him sidelined for the last two Leicester games on the back of a nine-match goal drought.

However, the 33-year-old is still the joint top scorer in the Premier League this season, alongside Pierre-Emerick Aubameyang, with his 17 goals.

His recent slump in form has coincided with a dip in results for Leicester, who have won just one of their last seven Premier League games ahead of Monday night's fixture against Aston Villa.

"It's been a great start but you don't want to be that team that has a great start and all of a sudden you're not up there," said Vardy. "We've got to keep working hard to try and pick up as many points as we can in these last 10 games.

"If anything, the inconsistency shows you that things are changing. Look at the squad we've got, we're more than capable of beating anyone on the day and other teams up there like Sheffield United have been playing really well. They deserve to be up there. It's the consistency that they're putting in week in, week out.

"That's where we've got to get back to, that consistency that we had in the first half of the season and hopefully that will keep us up there."