Van Dijk reveals the only game he's watched back during lockdown 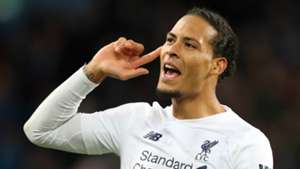 Virgil van Dijk has revealed that he has only watched one match during the period of lockdown amid the coronavirus, with the Liverpool defender having viewed a game from his days playing in the Netherlands.

The Dutchman began his professional career at Eredivisie side Groningen before moving to Celtic in 2013 and then later Southampton, in 2015, as he made the switch to the Premier League.

Van Dijk's profile has continued to rise since then and he secured a move to Liverpool in January 2018, with the Netherlands international defender having since won the Champions League and been a runner-up in the voting for the Ballon d'Or.

With football having been postponed across the globe amid the coronavirus pandemic, Premier League players have been spending time at home during a period of lockdown in the UK but Van Dijk hasn't been watching any of his previous matches for the Reds.

He the club's official website: "I don't watch too much football, to be fair. Especially from this season I didn't watch any particular game back, if I'm honest. I don't know why, it's just how it is.

"It was on TV and I watched it back. I miss watching football and obviously playing football but it's a bit of a difficult one I think. I didn't watch any of the Liverpool games this year, I have seen a couple on social media, some highlights - it's nice to see and a good feeling to get. But, apart from that, not really."

The Covid-19 outbreak continues to cause devastation around the world, with over 29,000 cases of coronavirus having been recorded in the UK alone.

Van Dijk commented on the situation and insisted that staying home and ensuring the safety of family members is the most important consideration at what is a distressing time for people across the globe.

"Obviously it has been very surreal, a bit crazy," the centre-back said when asked how he had been coping the last few weeks. "You have never experienced things like this before, you see these kinds of things in TV shows or films, things that you never really come up against.

"Yeah (Van Dijk's family are currently fit and healthy), as long as we're together, that's the most important thing. Staying home, staying together and being healthy - that's the main thing and everyone is coping."